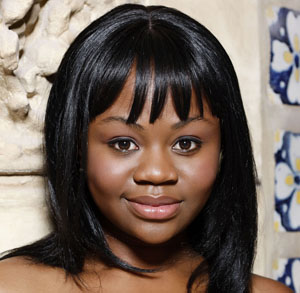 Hope Olaide Wilson stars in I Can Do Bad All By Myself.
(Credit: Odessy Barbu)

When you watch the touching performance of Hope Olaide Wilson in Tyler Perry’s I Can Do Bad All By Myself, it is easy to see that a real star is born. The actress stars as Jennifer in the latest installment of the successful Madea franchise.

Her character is an angry teen (The actress is 20!) who must care for her younger brothers. After breaking into the home of Perry’s Madea, the old “woman” puts the kids to work as part of a deal with their estranged aunt April (Taraji P. Henson). It is a long road filled with struggle, but Jennifer is finally able to let go of some of her issues and find the love and stability she lost after being abandoned by her drug-addicted mother.

Wilson was quite excited when she received word that she would be working with Perry. After all, the director’s last few films were huge successes.

“[Tyler] really writes solid characters,” she says. “I mean, for him to take a chance on me and to give me a chance is so amazing.”

As for her poignant portrayal of Jennifer, Wilson is incredibly humble about her preparation.

“The main thing I do is not really looking at what my character says, but at what other characters say about my character,” she admits.

Despite the heady subject matter displayed in the film, it has some astoundingly funny moments that carried over into the cast’s downtime.

“We had a lot of fun,” jokes Wilson. “[Perry] took very great care of us. We were living in these condos. We had rental cars. There were cast dinners.”

In the future, she’d love to work with Danny Boyle and Clint Eastwood, but for now, in Wilson’s eyes, Perry is king.

“You feel confidence in [working with] him,” she says proudly.

I Can Do Bad All By Myself releases in theaters Sept. 11.