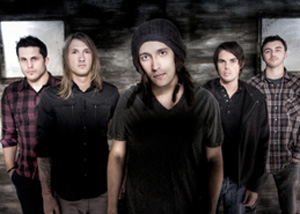 Though still young men by all accounts, the members of Saosin have been touring musicians for a good while now. They know what to expect when they head out and how to handle problems; they’re experienced road vets. So what impending doom on the horizon was vocalist Cove Reber most worried about when his band set out on this year’s Vans Warped Tour?

Surviving Florida in late July while having dreads.

“We’ve all done Warped a couple times now and knew how hot it was going to be, but the hair is always a big issue,” says Reber. “I just got them looking somewhat better than they were before, so I’m not going to cut them for a while,” though with a pointed glance at guitarist Beau Burchell, he adds, “I hope nobody else cuts them off in the middle of the night.”

Much as how the big-voiced frontman coifs himself may seem trivial, like asking band members what type of underwear they sport or where they might take a reader on a hypothetical first date, his dreads are something of a symbol for where his band is at now. The Newport Beach-native rockers have done some significant growing since completing their previous album, and with the release of its follow-up, In Search of Solid Ground, the fivesome is tighter than ever and not afraid to get a little wild and unruly.

Enlisting the help of such rock mainstays as John Feldmann and Butch Walker this time around, the band decided to go a different route from past albums, splitting the album’s tracks between multiple producers and taking the reins for themselves on a few songs as well.

“When you do a whole album with one person, by the time you get toward the end of it, you already know what their opinion is going to be about a certain matter,” says Burchell. “Like, ‘What do you think about this guitar line?’ You know they’re going to say, ‘No way, you’re not doing that guitar line,’ but you’re already planning your response, ‘Well you just hate guitar lines.’ So it was more fun to do it with different people, because then you didn’t really get used to their way of thinking. In reality, everyone’s shooting for the same goal, which is trying to come up with the best songs possible.”

Echoing Burchell, Reber adds, “The experiences you have with one producer can really lead you to having better experiences with the next one. It took forever and it was stressful, but I can’t complain.”

What Burchell is most proud of though, are the tracks where he and his band mates took complete creative control.

“I especially like the songs we did on our own, because we wanted to do some percussion and group drum stuff,” he says. “We had about six drum kits in a huge circle, with us and our techs doing this huge Last of the Mohicans Indian drum circle thing. We never would’ve been able to do that on our last record.”

And though they tread into some uncharted territory with the instrumentation, fans of Reber’s distinctive soaring vocals and Burchell’s equally as recognizable intricate guitar work won’t be disappointed by the album’s offerings either.

As stoked as he is to talk about recording, everything that happens afterward is a different story for Burchell, who remains cautious about hyping the album up.

“Right now is always the worst part, because you have to talk about the record, but no one knows what it is. You don’t want to say it’s great because then people are expecting it to be amazing,” he says. “It’s like when all of your friends come back from a movie and say it was great, then you watch it and are like, ‘It wasn’t that great,’ whereas if your friends wouldn’t have said anything, you probably would’ve thought it was great.”

Though he says this jokingly, Burchell still shouldn’t worry. Despite what their album’s title says they’re looking for, the members of Saosin seem to be in a good place where they are.

In Search of Solid Ground is currently available. Saosin will do an in-store Sept. 9 at Best Buy Northridge and will perform Sept. 12 at Chain Reaction and Nov. 6 at House of Blues Sunset Strip. For more information, visit saosin.com.