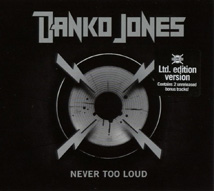 Canadian hard rock trio Danko Jones formed in the ’90s and have enjoyed a cult level of success ever since. However, a change in sound on their latest, Never Too Loud, marks the band’s new aim for commercial success. Jeopardizing the identity that made them famous, the band trades their powerful vocals and dirty bass for more radio-friendly songs and an acoustic sound.

Admittedly, the album delivers several decent tracks like “Code of the Road” and “City Streets.” However, the tracks conspicuously progress with studio polished songs that blend them together with other modern rock acts targeting those who believe they’re rock fans, but can’t really stomach the real deal.

Never Too Loud is currently available.