LA Hopper: More Than Just a Cheap, Safe Ride to the Party 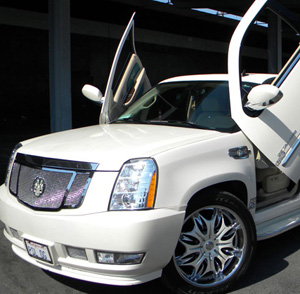 Cruise L.A. hotspots in one of LA Hopper’s rides.

If you’ve lived in Los Angeles for any amount of time, you know the importance of having a car. Sure, we’ve got the bus and subway (What? It’s not just a sandwich shop.), but using them is just so inconvenient, and for your typical human being, paying for a taxi is at least a little exorbitant.

In reality, you’re left with two options. You could opt to drive to your out-of-the-way party, where you further complicate your night by having to choose between naming a designated driver (and hoping they stay sober) or driving home at least somewhat inebriated. Or you could limit yourself to walking to the frat down the street that has a party every day that ends in –y.

Luckily for all of you currently on (or near) college campuses, if you’re tired of going to the same bar week in and week out, there’s new hope for being able to get around Los Angeles (and soon even Orange County): LA Hopper.

LA Hopper was started by Andrew Citores, a 21-year-old former LMU student who felt limited by the lack of low-cost, convenient public transportation with easy direct access to areas outside of LAX.

“We’re trying to create an opportunity to see the other side of nightlife in L.A.,” Citores says. “There’s so much to see, there’s so much culture and beautiful venues, places to go, fun places to party, and it’s usually not right down the street from where you live.”

With its official Web site launch last week, LA Hopper already have plans that are guaranteed to have the good times rolling. With both 21-and-over and 18-and-over events, the company offers students safe transportation options with a usual price tag of $15 or less. Thirsty Thursdays will be especially awesome when a round trip ride on the party bus is only $5.

But the fun doesn’t stop there! If you’re looking to do something specific, LA Hopper is a full-service event planning company. With a wide range of vehicles from party buses to Jacuzzi Stretch Hummers, right on down to a cozy Bentley, they’re sure to have transportation to fit your style. Not to mention they can help you plan a private party, where they’ll not only provide transportation, but they’ll also make restaurant reservations, get you on the right guest lists and even take you to that after hours club after last call.

“We’re young, we understand the culture. We understand how people feel, especially when some bus driver talks down to you because you’re 21,” says Citores.

And they’re really not about the money. Their commitment to putting an end to drunk driving goes way above and beyond the call of duty. While the party buses only run regularly until 2 a.m., partiers who miss the last bus are encouraged to call LA Hopper and they will send the bus back, have an employee personally come for a pick up or (and this is the absolute worst case scenario), call a cab.

For the time being, LA Hopper is based mostly out of USC, Chapman and LMU, but only because that’s where they have the most on-campus reps. If your college isn’t on that list, then it’s so not cool enough (I’m looking at you, UCLA!). Just kidding, but seriously, if you’re interested in changing that (and making a bit of cash on the side) or planning a private party, contact LA Hopper and let them hook you up.