The Other Man: Adultery from Every Angle 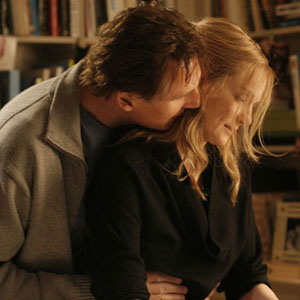 Liam Neeson and Laura Linney in The Other Man
(Credit: Image Entertaiment)

How well do we know the people we’re the most naked with? That is the haunting question at the center of Richard Eyre’s new film, The Other Man, starring Liam Neeson, Laura Linney and Antonio Banderas. The film investigates the duality that exists in everyone’s personalities and how easily people can fracture, becoming someone else depending on whom they’re spending time with.

Linney and Banderas sat down to discuss their roles at the SLS Hotel in Los Angeles one afternoon as plumes of smoke choked the city, giving the sunny skies a sick ominousness, an eerily apt atmosphere under which to discuss the movie’s discussion of dark, murky subjects as well as its celebration of love.

Both Linney and Banderas admit that the film’s subject matter made them a little trepidant. The Other Man follows a husband (Neeson) who begins to unravel clues that his wife (Linney) has been carrying on an affair (with Banderas, naturally).

“I wasn’t really attracted to the role to be honest,” Linney begins.

She says what drew her to the part was the opportunity to work with both Neeson and Eyre again after Eyre directed the actors in their Tony-nominated Broadway production of “The Crucible,” as well as having the chance to get to know Banderas professionally. She says she accepted the part without even reading the script.

“I just said yes and then read the script and said, ‘OK, this is my challenge now,’” she shrugs.

Similarly, Banderas was drawn to the caliber of the creative talent attached to the film, but he still had tremendous reservations about his portrayal of a man cloaked in mystery and dripping with lascivious charm.

“I had to step into territory that is an unknown zone for me, a type of nakedness,” Banderas says in his delectable Spanish accent. “[Eyre] took me to places of exploration, unknown places. Here is a cliff, you have to jump and you don’t know if at the end of this jump there’s going to be rocks down there or water,” he laughs.

Both actors said the film’s nonjudgmental approach on the topic of adultery made calculating and tempering their performances a huge challenge, but it also gives the audience a much more interpretive experience while watching the movie.

“It’s complicated,” Linney says with a sly smile. “You can take one viewpoint and philosophy and watch the movie and it’ll be a very different experience than if you watch it with a different philosophy. I wanted to play it so [all] points of view were possible.”

For Banderas, he was thrilled to make a film that offered “the opportunity to sit in and reflect about things that are very deep into the soul of human beings. This is a movie that, in Hollywood, would have been impossible to make because they would cut it to make it edible for audiences. It doesn’t give you straight answers.”

“It’s provocative,” Linney adds, “for some people in a good way and in some in an uncomfortable way.”

One of the film’s major throughlines is technology and how it has changed, and in some ways demolished, the way people communicate and how they woo.

When asked how cell phones, the Internet and computers have affected romantic relationships and entanglements, including people’s desire to potentially cheat, Linney nods her head knowingly and says, “There’s no time to think. People are acting but they’re not necessarily thinking.”

The Other Man releases in select theaters Sept. 11.