A Fine Frenzy: No Fault Found in Alison Sudol 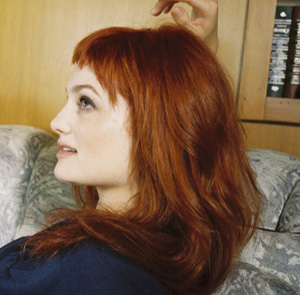 Bomb in a Birdcage is the latest studio work from Alison Sudol, the force behind A Fine Frenzy. Taking its name from lyrics found on opening track “Wouldn’t Do,” the CD’s title “summed up the state of mind I was in during the making of the album,” says Sudol. “[I was] a vulnerable, rebellious, conflicted, happy mess.”

Immediately following the tour for her debut, One Cell in the Sea, Sudol returned to the studio with a ceaseless creative energy, sparked from the musicians she had worked with while traveling on the road. The result is a collection of songs that seem like love letters from a hopeless romantic caught inside a fairy tale. This is no surprise as Sudol generally writes best when she feels strongly about someone.

Thematically, she dedicates the record to “feathered friends, forces of nature, fun ... words that start with ‘f.’”

First step artist, next step producer seems to be the case for Sudol considering she was more hands on in every aspect of the album. She used recording techniques inspired by artists like the Talking Heads, Belle & Sebastian and Ray LaMontagne to establish a considerably more electric tone on this far from sophomore slump. Look out for the first single, “Blow Away,” an upbeat anthem that reflects the more feckless side of the redheaded songstress.

Known for her vocals and piano accompaniment, Sudol has more than proved that her music is an art form. She’s no stranger to taking risks though she does timidly admit to writing most of the songs on guitar first.

“I’m not ready to record my wonky guitar stylings just yet,” she says.

Bomb in a Birdcage is currently available. For more information, visit afinefrenzy.com.