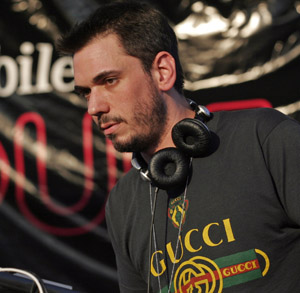 Adam Goldstein, better known as DJ AM, has died. The popular entertainer was found dead in his New York City apartment Aug. 28. As of press time the cause of death was undetermined, but various news sources report that drug paraphernalia was found in the apartment.

Goldstein’s past struggles with drugs are well documented, but the jet setting DJ – previously linked romantically with Nicole Richie and Mandy Moore – was said to have cleaned up after miraculously surviving a plane crash last year. Goldstein was even about to “star” in an MTV reality show where he was to help the families of substance abusers stage drug interventions.

Goldstein also performed in the hip-hop duo TRV$DJAM and was co-owner of LAX nightclub in Los Angeles. DJ AM was 36 years old.

Nirvana’s 1992 show at the Reading Festival is a much-revered performance that collectors have until now only been able to obtain as a bootleg. Universal will soon release Nirvana Live at Reading in various configurations including a DVD version that features 23 song clips that have never been released before.

The set list includes most of Nevermind, three songs that would eventually turn up on In Utero and covers of Fang’s “The Money Will Roll Right In” and “D-7” by the Wipers. The release date is Nov. 3.

The singer for veteran Hermosa Beach punk group Pennywise has left the band. The rest of Pennywise – Fletcher Dragge, Byron McMackin and Randy Bradbury – issued the following statement about the departure of Jim Lindberg after 19 years of fronting the band:

“Pennywise has long stood behind the motto that you should always follow your heart and pursue what makes you happy, and we wish Jim the best of luck in his new ventures, whatever they may be. As the three remaining members of Pennywise, we feel that we are not done delivering our message to our fans. We will begin our search for a new singer immediately. We will continue to tour the world, and we are looking forward to writing new music.” The most recent Pennywise album, Reason to Believe, was released through MySpace Records about a year and a half ago.

Ever wonder what Brooke White’s favorite dessert is? The answer is the kind of thing you’ll need to know if you want a shot at winning a Yamaha NP-30 keyboard autographed by Yamaha artist Sarah McLachlan.

For a chance to win, visit YamahaAllAccess360.com and get familiar with the profiles of the Yamaha-playing artists displayed there. Then correctly answer three trivia questions about the artists and you’ll be in the running for the NP-30, a super-slim keyboard that weighs only 12 pounds yet delivers full digital piano sound.

Entries will be taken until Dec. 1, and the winner will be announced around Dec. 15.

Atticus Tour on the Way

Blessthefall and Finch will be the co-headliners of this year’s Atticus Tour. Also on the bill are Let’s Get It, Drop Dead Gorgeous, Vanna and Of Mice and Men.

Blessthefall has a new one debuting just in time for Atticus Tour 2009; Witness drops Oct. 6 through Fearless as the tour rolls into Chain Reaction in Anaheim for an all-ages show on Oct. 10 and then visits the Knitting Factory the next day.

The Cribs: Ignore the Ignorant

British punk rockers the Cribs have released their new effort through iTunes. Ignore the Ignorant is the first full album that the Jarman brothers (Gary, Ryan and Ross) have recorded with their new guitarist, ex-Smiths member Johnny Marr.

Marr is not shy when speaking about his latest gig, raving that the Cribs “possess the brains of the Buzzcocks, the guts of Nirvana and the fizz of the Ramones.”

A deluxe version of Ignore the Ignorant with 14 bonus live tracks recorded earlier this year at the Ritz Nightclub in Manchester, England, is also available at iTunes. If you’d rather get your copy of the album on CD, physical copies will drop through Warner Bros. Nov. 10. The Cribs will be launching a full U.S. tour this fall, and they’ve already announced a show at the Roxy Nov. 9.