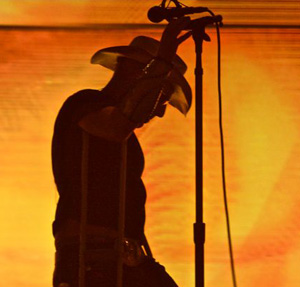 Bands from all ends of the rock world gave fans one last chance to go wild this summer. Boasting a lineup with local favorites like the After Midnight Project and hometown heroes Linkin Park, Epicenter was an event not to be missed.

But the real attraction of this event wasn’t the coming out of Alice in Chains in support of their newest album in a decade with a new singer, but a rare performance by Tool. After sustaining an injury at his Arizona vineyard, frontman Maynard James Keenan almost didn’t show. But instead of lying down and resting, he grabbed a pair of crutches and took control of a crowd that enveloped the whole Pomona track.

With a light show and hi-def visuals, the untouchable sound of Tool was magnified several times over as they ripped through a set that pulled tracks from Undertow all the way to their most recent albums — much to the delight of fans.

With the heat still resonating from the ground, the night sky did little to save those begging to get out of the two massive pits in front of the main stage. It’s this kind of power that can only be found in music at a live show. And with Tool on stage, you better be ready for all hell to break loose, especially when you’re at the Epicenter of it all.