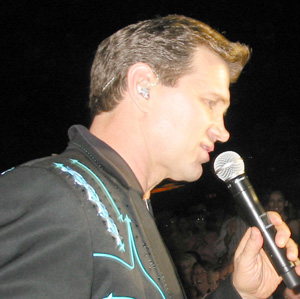 If Chris Isaak has shown anything in his 25-year career, it’s consistency. He’s cranked out 11 albums, sticking to the same basic formula of melancholy, Sun Studios-inspired rock and even held onto the same band for over 20 years. They even appear to like each other!

Despite having penned an endless stream of ballads about unrequited love, live, Isaak is downright jocular, tossing out constant one-liners and hilarious anecdotes all night, even joining in with band mates for a bout of tongue-in-cheek choreography. But the man knows humility; he and his band mates are the main focus of his quips.

He treats us to a hearty mix of his own compositions as well as some carefully chosen covers. His classics “Wicked Game” and “Baby Did a Bad Bad Thing” are timeless favorites. New selections like “Mr. Lonely Man” and “Best I Ever Had” are equally well received.

Isaak and his band are endearing, playful and moreover, sexy. At 50, a perfectly placed hip swivel still makes the ladies shriek with glee.

At one point, he ventures into the audience, traversing the entire theater pausing to be pecked and groped by the ladies along the way as he croons “Love Me Tender.” Isaak, perhaps rock’s last remaining troubadour, stands among the best showmen of all time.