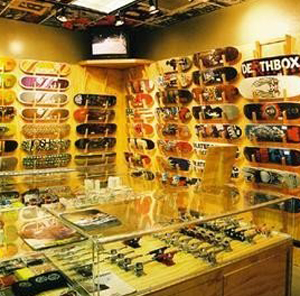 1) Skater Friendly: Not only do they sell gear, but they promote skating around the shop as well.

2) You Gotta Fight for Your Right to Party! Not at Nine Star you don’t. They serve as a great party location for any event, from after prom to the ESPY after party.

4) Nine Star Opens the Can of Whoop-Ass: Fourteen skate shops had one night to make their clip at Volcom’s Skate Park. Nine Star’s clip was recognized as the best overall video, and they won a 30-second commercial.

5) Supports Youth: Nine Star gives kids the opportunity to participate in various skating events at the Plan B and Girl Skateparks.

6) Picasso, Van Gogh, Matisse, oh my! Maybe the artists featured aren’t quite as famous as these icons, but the shop does support the visual arts. Previous art exhibits: Jason Alexander Cruz and Corey Smith.

7) Cool Kicks: Everyone knows that shoes are what really pull a look together, so polish your ensemble with the Nike SB August 2009 Sneaker Collection. Check out the Dunk Mid “Green Bay Packers” or the Dunk Low “Ron Burgundy.”

8) So Exclusive: The limited edition Volcom Stone line, “Volcom Stone Age,” designed by skaters for skaters is only being sold in a couple stores nationwide, including Nine Star.

9) First is the Worst, Second is the Best: That elementary school rhyme feels incredibly appropriate in terms of the Silver Medal won by Nine Star’s skate team, who were skating with injuries and a re-figured team at this year’s X Games.