Lisa Leslie: Basketball star prepares to ride off into the sunset. 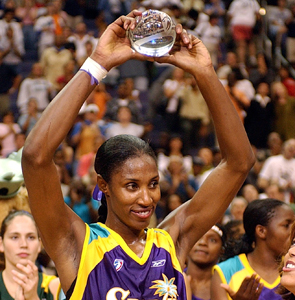 She may be sparking a sense of pride and patriotism among her fans as she rides high on her Trojan horse into the L.A. sunset, but Lisa Leslie is not making a big deal about the end of her professional basketball career. But do not let her nonchalant, humble persona water down the impact she has had on American professional sports, helping to create a place for women’s professional basketball.

An entire generation of basketball fans has identified Leslie with the WNBA since its inception in 1997, as she helped make the league what it is today: an outlet for women to have an equal playing field.

“She came, she saw, she conquered,” Sparks head coach Michael Cooper tells Campus Circle. “She did it all.”

Cooper adds that she has defined what it means to be a professional athlete, regardless of gender or sport.

“She is a leader by example … on how to be a big time player,” Cooper says. “You’ve got some great players that have something to emulate and to come out with that work ethic and intensity every night, no matter whether things are going good for you or bad. It’s all about the standard of what it’s like to be a professional athlete.”

As much as she has conquered – four Olympic gold medals, three WNBA MVP awards, two WNBA championships and a storied career at USC – Leslie is just happy to see progress.

“It’s been awesome to see the growth of women’s basketball,” the 37-year-old Gardena native says. “Hopefully our children’s children will have the opportunity to play.”

The growth of the WNBA has been awesome, indeed, but Leslie ultimately hopes she inspired others to achieve great things.

“It’s important for me to be a role model, for people to see where I’ve come from and where I ended up,” she said. “It’s not just been given to me. It’s taken a lot of hard work to get here. I had a lot of great moments wearing the purple and gold and being able to represent my city.”