“The Importance of Being Earnest”: Now-Sept. 26 @ Sierra Madre Playhouse 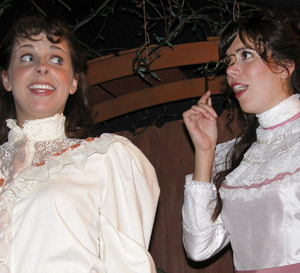 The Sierra Madre Playhouse has produced an impotent staging of Oscar Wilde’s comedy of names, but it has Jessica Culaciati going for it.

She plays Gwendolen as if the whole world knew whom she was, and if it didn’t, was worse off. Exactly the kind of woman that would attract an overly earnest bachelor like Jack (a stiff Brett Hamilton), she doesn’t hide anything about herself, which is not what can be said about the gentlemen of the play. Culaciati is sharp and deft with the language, and her comedy is way ahead of the boys.

Gwendolen is also the kind of woman who would, in sheer competition with her cousin Algernon, turn him into the monster of pomposity that Jason Perlman plays him. But while Culaciati is easy and detached in her ludicrous manners, Perlman doesn’t seem to get the joke.

He plays Edwardian fop without much intelligence, which is to say he plays it unceasingly ironical, as if his life depended on cheeky seriousness. This led to distracting excitable moments, as when a chunk of sandwich flew out of his mouth mid-bluster and the old ladies in the audience gasped, or when he got stuck in a frock coat he was trying to change out of. But that’s the trouble with an off night.