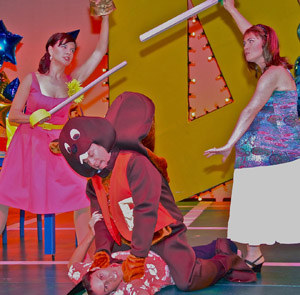 The anonymous setting of “Bright Ideas” is located wherever one finds the hip and affluent Americans that are not aimless 20-somethings, but a little older, overworked and unsurprisingly lackadaisical, and married. In “Bright Ideas” the maturities of a large car, a home loan and a fat bonus are less like magnificent freedoms and more the tiered stones of a pharaoh’s pyramid, and playwright Eric Coble does well to bury his characters in them.

Add to those weights a child, a flesh-and-blood status totem cash vacuum birthed to a pair of walking Bluetooth devices, a child that’s an investment opportunity, and you have a scenario of the desperation to succeed, that kind of obsessive care and compulsive scheduling that is only symptomatic of the sociopathy coursing through the upper classes.?

Amie Farrell as Genevra and Brian Stanton as Joshua perform the Lady Macbeth/Macbeth binary quite well in all its juicy paranoia as they begin to seriously consider murdering Denise for her spot on the Bright Ideas Preschool waiting list. Denise is one delicious, big idiot, in her ignorance as rich as a truffle-infused Italian ham, one of the more classic portraits of buffoonery I’ve seen outside of reality television, played by a superb Meghan Maureen McDonough.

Denise is Genevra and Joshua’s competition to get their child into the Harvard of preschools, and Denise has a yacht more money to donate to the school, to tip the scale in her favor, than they do. Denise is in the way. They poison her. They get away with it. Murder solves problems. It’s the sense of power that accompanies a successful murder that Genevra and Joshua abuse and which predictably corrupts them.

Coble’s play is a funny scalpel on its own, so why he bothers with more than a few Shakespearean parodies and puns is beyond me. But “Bright Ideas,” however more farce than tragedy it is, does tap into a sweet catharsis. Everyone gets what’s coming to them.