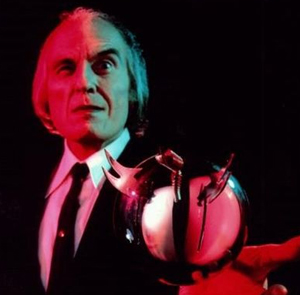 Even though Halloween is still a month away, the Aero Theatre is spooking itself early with a full schedule of scary screenings with some of the genre’s most beloved flicks. And even though we missed Poltergeist, The Legend of Hell House, the Jaws, Jaws 2 and Jaws 3 triple feature (That’s six hours of shark attacks!) and last Friday’s Ghostbusters and Ghostbusters II double feature, the “Apparitions, Hauntings and Supernatural Sightings” series has saved the best for last – Phantasm.

The Aero is screening the first three of director Don Coscarelli’s Phantasm films (The fourth one was released in 1998.) in a four and a half hour-long triple feature of fear. As one of the best cult horror film franchises to come out of the ’70s, Phantasm was an ingenious twist on the zombie movie.

Costumes and props are dark like a Jim Henson’s “The Storyteller” set, and the plot includes the dwarf undead, flying silver spheres and the creepiest villain yet, a deranged undertaker known only as “Tall Man,” who turns dead bodies into brainwashed zombies in another dimension that attempt to take over the world on his behalf.

After the release of his home-bred original (It cost only $300,000 to make.), Coscarelli took his idea to Universal and used their studio budget to make a sequel that is as exhilarating as the first but with more blood and bigger sets. The third installment of Phantasm, Lord of the Dead (1994), follows more unsuccessful attempts to stop Tall Man and finally provides names for the dwarves (lurkers) and flying silver orbs (sentinels).

As the send-off event of a premature spookfest, the Phantasm trilogy triple feature is a must for any horror buff. Coscarelli will be on site with some of his actors (including Angus Scrimm who played Tall Man in all four movies), and there will be a discussion during one of the two intermissions.