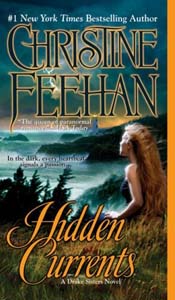 Kidnapped, raped and brutalized into submission. Imagine you survive all that only to be haunted and tormented by your assailant, one that can reach across oceans and use your own mind against you. Amidst an undercover mission, Elle Drake, the seventh daughter of the seventh daughter, the one with all the magical powers present in the Drake sisters, finds herself trapped by a madman. Her only hope of rescue is her telepathic connection with Jackson Deveau, a madman in his own right.

The last book of the Drake series, Hidden Currents is by far the best. Although the plot centers on Jackson and Elle, the readers can catch up with their favorite characters introduced previously. Many loose ends are tied up just as expected.

However, author Christine Feehan hints at enough details, all of which can turn into a novel, leaving the readers to wonder what comes next. Perhaps a Prakenskii Saga? Or maybe even…

Regardless of where Feehan’s imagination would take her fans next, her message is very clear. No matter how strong you are, you cannot survive your demons without the love and help of your family and friends – a reality that Elle Drake realizes the hard way.