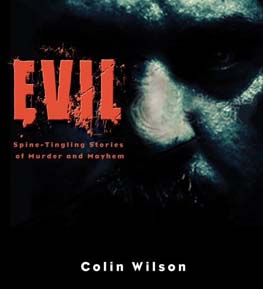 Just how evil are the true stories recounted in Evil? Take for example the case of Edward Hickman, who kidnapped and murdered 12-year-old Marion Parker in 1927.

Hickman went to the Mt. Vernon School in Los Angeles and told the registrar there that the little girl’s father had been seriously injured and was allowed to abscond with the child. He demanded a no-police-involved ransom of $1,500 for Marion’s safe return, and her dad agreed to it.

When the two met to make the exchange Hickman pushed Marion’s dead body out of his car and sped off – the girl’s hands and legs had been hacked off, she had been disemboweled and stuffed with rags and her eyes had been wired open. Her severed limbs were later found in Elysian Park. That’s how evil.

Hickman stole a car in Hollywood and fled to Oregon, but he was quickly caught and ended up being sent to San Quentin where he was eventually hanged for his crimes.

From Jack the Ripper to Jack the Stripper and from Lady Bluebeard to the Monster of Cinkota, this book documents the stories of some of the most vicious and sensational killers of all time. There are no pictures of mutilated bodies or the like here, but Evil is very generously illustrated with photos of the criminals, crime scenes and in some cases, the instruments of death.