To Live Is to Die: The Life and Death of Metallica’s Cliff Burton 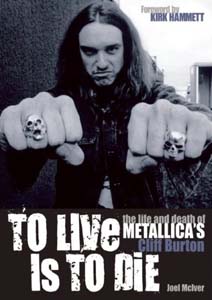 Burton died at the age of 24 when Metallica’s tour bus overturned on an icy highway in Sweden in 1986. The untimely death meant that Burton left a relatively small body of recorded work behind, but that music looms huge in the annals of rock; his bass playing helped to make early Metallica albums Kill ’Em All, Ride the Lightning and Master of Puppets some of the most revered thrash rock albums of all time. Indeed many will point to those three releases as being the blueprints for the entire genre and to Burton as the true mastermind behind the sound.

To Live Is to Die explains and celebrates how it all happened. Burton’s story starts with a supportive family; his mother Jan says that a young Cliff loved classical music, especially Bach, and spent countless hours studying it in the family home. Burton’s time with his pre-stardom bands EZ Street and Trauma is covered; it was at a Trauma gig at the Whisky a Go Go that Lars Ulrich and James Hetfield decided they were going to ask Burton to join Metallica.

McIver has previously published Justice For All: The Truth About Metallica, but there’s lots of inside information here that was not revealed in that tome. Commentary comes from Exodus founder Gary Holt, Metal Blade Records founder Brian Slagel, producer Flemming Rasmussen and Cliff’s girlfriend at the time of his death, Corinne Lynn.

Burton thought of his bass as a lead instrument and played accordingly, and that technique is discussed by various persons throughout the book as well. Of course, everyone knows how the story ends, and the final chapters spell out the details of the fatal bus wreck, including with insight from John Marshall, a Metallica roadie who was also riding on the ill-fated bus.

To Live Is to Die is currently available.