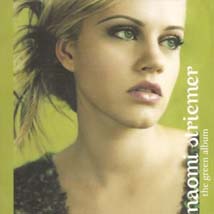 The Green Album is incredibly dramatic and theatrical yet gentle and graceful. It contains the strength of a powerful church ballad, but it is also filled with beautiful and dynamic piano and string accompaniment.

The climactic build-ups engendered by the nearly operatic album make it seem like the perfect soundtrack for an epic love story like Gone with the Wind. Naomi Striemer’s overall sound is comparable to a mélange of different artists, ranging from Enya to Evanescence, all consisting of both elegance and vigor, and the tone of her voice is similar to the very distinct and commanding Shakira.

Billboard claims she “will become the commanding diva of the decade.” I’m not so sure I agree with that. Her sound isn’t very modern, and it’s very specific, but if you like suspenseful and thrilling music, then I recommend Naomi Striemer.

The Green Album is currently available.