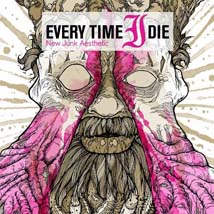 From the first thunderous notes of opening track “Roman Holiday,” guitarists Jordan Buckley and Andy Williams show they mean business on their band’s fifth full-length album. As soon as frontman Keith Buckley loosens his signature gravel-voiced roar, it’s clear that business is dirty and gritty enough to scare even Mike Rowe off.

New Junk Aesthetic isn’t a huge departure from the raw and uninhibited thrashing and shredding that pushed the Buffalo natives to success, but it does display how much they’ve mastered their distinctive style over the last eight years. As displayed on standout tracks “Wanderlust” and “Host Disorder,” the Buckley brother behind the microphone’s half spoken-word growling, half melodic crooning is as infectious as it is brutal, layered over smart lyrical wordplay that’s atypical for a band in their genre.

Whether jumping on with this album or one of their older definitive records, fans old and new will find a favorite jam on New Junk to be the soundtrack to their weekend-long debauchery and vice-filled drug benders.