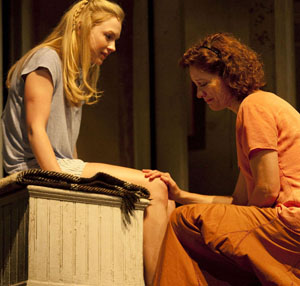 According to playwright Tracy Letts, T.S. Eliot got it wrong. August, not April, is the cruelest month of the year. Letts’ 2008 Tony Award and Pulitzer Prize-winning play, “August: Osage County” proves her theory.

The play is set at a family’s home, during the oppressive heat of August, in the part of Pawhuska, Okla., the characters call, “The Plains,” which can also be considered a metaphor for the combustible emotional state the family (headed by Estelle Parsons as the prescription-pill addicted matriarch) lives in. It is constant spiritual erosion, after years of secrets kept for too long that have rotted away at each of their souls, to the point of being emotionally broken.

When the alcoholic patriarch disappears and they discover he’s dead, everything unravels, and the family buckles from under the grief. Each of them reacts by unraveling in a unique and individual way, ultimately, revealing a dysfunctional family ripped apart by grief.