Army of Darkness and more 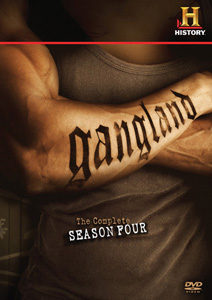 Stranger Than Fiction: Just in time for the release of Dan Brown’s follow-up to The Da Vinci Code, check out the History Channel’s Mysteries of the Freemasons. The special investigates the secret organization, whose members included the Founding Fathers and which has been attributed with all manner of ominous significance.

“Gangland” returns for its fourth season, taking you inside the nationwide plague of street violence. Gang members, police and sociologists from New Orleans to Chicago weigh in.

Trumbo documents the life of blacklisted screenwriter and novelist Dalton Trumbo. The Oscar winner continued a successful writing career under different names and eventually scored a triumph directing his own adaptation of his landmark anti-war novel Johnny Got His Gun. The film includes appearances by a bevy of stars, including Donald Sutherland, Michael Douglas, Paul Giamatti and more.

Blu Notes: Robert Altman’s seminal counterculture comedy M*A*S*H comes to Blu-ray. Elliott Gould and Donald Sutherland would go on to define a new generation of offbeat stars. The anti-war comedy remains as sharp as ever.

Under the Radar: Nightwatching, the latest from Peter Greenaway, visionary director of The Cook, the Thief, His Wife & Her Lover, tells the story of one of Rembrandt’s most famous paintings and the murderous conspiracy behind it. The DVD also includes the feature-length documentary Rembrandt’s J’Accuse.

The Idiotbox: The Complete First Season of Syfy channel’s effects-filled “Sanctuary” comes to DVD. The series follows Dr. Helen Magnus, her forensic psychiatrist protégé and her fearless daughter as they seek out the otherworldly creatures living amongst us in order to study and protect them. Taking a cue from George Lucas, the series makes extensive use of green screen sets.

Dennis Hopper stars in “Crash,” the Starz spin-off of Paul Haggis’ Oscar-winning film. Like the movie, the series follows a diverse cross section of Angelenos as their lives unexpectedly collide, changing them forever.

Until “The Simpsons” passed it this year, “Bonanza” held the title for longest-running primetime series for 50 years. The landmark western follows a ranch owner and his three sons as they contend with outlaws. The Official First Season is now available.

Made in Japan: Season One of “Dragon Ball,” the series that launched an anime phenomenon comes to DVD. Two “Dragon Ball Z” compilations join it: Bardock: Father of Goku and The History of Trunks.