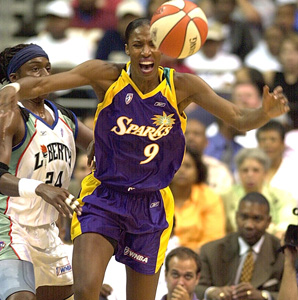 Despite the pre-game ceremony at the Sparks’ regular season home finale honoring Lisa Leslie, the retiring WNBA star has at least one more game to play at Staples Center, thanks to a 90-61 win on Friday night against the Minnesota Lynx. The victory secured the Sparks as the third-seed in the WNBA Western Conference playoffs, meaning they will host second-seed Seattle Storm at home Sept. 16.

The Sparks (18-16) followed with a road victory in the final regular season game in Phoenix on Sunday, defeating the Mercury, 81-78 behind 24 points, 14 rebounds and three blocks from Candace Parker.

A best-of-three series, the Sparks play the first-round opener in Los Angeles Wednesday night, with games two and three (if necessary) in Seattle on Friday and Sunday. Seattle (20-14) has home court advantage throughout the playoffs.