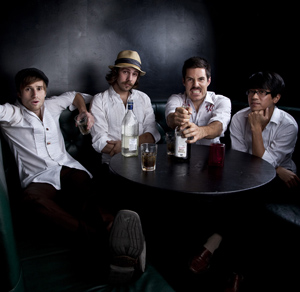 Two years ago, a newly formed band was in search of a name representative of their dirty and sweet characteristics, particularly one without any preconceived notions.

“We don’t want a name to decide our music, we want people to listen to our music and decide,” lead singer AJ Jackson says.

After contemplating several contenders, such as Kid Model and First Chimpanzees in the States, the band chose Saint Motel. Consisting of Jackson, A Sharp (guitar), Greg Erwin (drums) and Dak (bass), the indie rock band met at Chapman University’s film school and bonded through their shared passion in music and cinema.

“It started out for fun, but we kind of knew we wanted to play in a band,” Jackson says.

Despite admitting the stiff competition in the saturated music industry, the band is determined to succeed by laying down all their cards on the table.

“We try not to have a plan B,” Jackson says.

Equipped with an arsenal of artistic talents, Saint Motel’s future looks promising. Their debut album, ForPlay, boasts raw creative energy, unique guitar tones and surprising sonic twists, and has been rapidly turning listeners into fans. Included in the growing list is KROQ, which has been playing their first single, “Dear Dictator.”

To complement their music, the band also utilizes their keen visual sensibilities to create original music videos available with the album purchase. Ultimately, the band’s full potential can be gauged by attending their live shows. By elevating the audience’s visual and auditory senses, they are constructing an altogether captivating artistic experience.

“We are a band you need to experience live. We have energetic live shows and visual accompaniment to make it entertaining and memorable,” Jackson says.