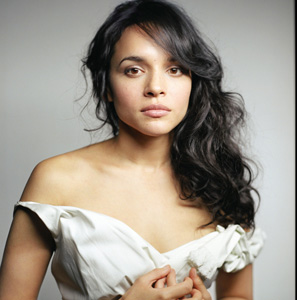 Norah Jones: out with the old, in with the new
(Credit: Danny Clinch)

Norah Jones has dumped her old band and is finishing up her new album with a stellar group of players including guitarists Marc Ribot (Tom Waits, Elvis Costello) and Smokey Hormel (Johnny Cash, Joe Strummer.)

“I knew I wanted to try some different things on this album,” says Jones. “I’d been playing with the same musicians for a long time, but it felt like a good time to work with new people and experiment with different sounds.”

Jones also says that she doesn’t play much piano on the new songs, accompanying herself mostly on guitar instead. The as-yet-untitled release is scheduled to drop sometime in December on Blue Note and will feature songs that Jones co-wrote with Ryan Adams and Will Sheff of Okkervil River.

No, you don’t have to “whack” anybody to enter the Hitman Talent Search. You do however have to be able to “knock ’em dead” with your singing prowess, because the purpose of the search is to find the next vocal superstar.

The contest is being staged in conjunction with the 10-city Hitman, David Foster & Friends Tour where the super producer (Madonna, Michael Jackson, Josh Groban) will appear on stage with a cast of friends and protégés like Charice, Philip Bailey of Earth, Wind & Fire, Peter Cetera of Chicago and former “American Idol” contestant Michael Johns.

One contestant from each city the tour stops in will be selected to compete live on stage when the tour wraps up in Vancouver, Canada on Nov. 8. The ultimate winner will secure a spot on next year’s Hitman Tour and spend time in the studio being mentored by Foster.

Contest rules and applications can be found at Namedrop.com, and the Hitman Tour stops at the Gibson Amphitheatre Nov. 5.

A New Job for Snoop

EMI is about to re-launch its Priority imprint, and they’ve hired Snoop Dogg as the label’s Creative Chairman. Priority’s roster basically defined West Coast rap, as acts like Snoop Dogg, N.W.A., Eazy-E and Ice Cube turned out hit after hit.

“Starting fresh with EMI is a great feeling,” says Snoop. “It’s a new partnership, a new Priority Records and a new Snoop Dogg: the Creative Chairman … the Boss Dogg … the Dogg Father.”

Of course the first new release that Snoop is overseeing for Priority is his very own; Malice N Wonderland drops in December and features guests Soulja Boy, Lil Jon, R. Kelly, The-Dream, Brandy and Jazmine Sullivan.

Anvil: This is Thirteen

There are certain scenes in the rockumentary Anvil! The Story of Anvil that have some filmgoers comparing the long-running Canadian band to Spinal Tap. The metal masters are far from a joke though; in fact they’ve been cited as an influence by such heavyweights as Metallica, Slayer, Anthrax and Guns N’ Roses. The movie has spawned such an interest in the band that VH1 Classic is giving Anvil’s music the widest distribution it’s had in years by reissuing the band’s 2007 release This is Thirteen.

This is Thirteen is actually Anvil’s 16th album; the title refers to the superstition and other mysterious meanings attached to the number 13. The CD contains the bonus track “Thumb Hang” while the vinyl version features re-recordings of “666” and “Metal on Metal” as bonuses.

This is Thirteen is currently available, and Anvil will be embarking on a major North American tour early next year.

Where The Action Is!

The latest box set in the Nuggets series from Rhino honors the L.A. music scene from 40 years ago. The four-disc Where The Action Is! Los Angeles Nuggets 1965-1968 compiles over a hundred “unsung gems” from acts as diverse as Captain Beefheart, the Seeds, the Beach Boys, Lowell George, the Electric Prunes, Spirit, the Monkees, Iron Butterfly, Kaleidoscope and even the Peanut Butter Conspiracy.

The lavishly packaged set hits stores Sept. 22, and there will be a release party with a Nuggets act performance and box signing that same day at Amoeba Music in Hollywood.