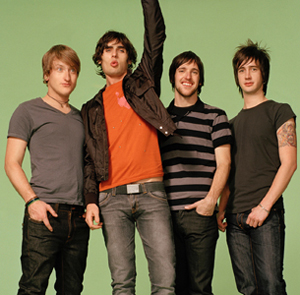 (Credit: The Warped Tour movie features performances by bands like the All-American Rejects.)

In its inaugural year, the Warped Tour brought professional skateboarders together with popular Southern California bands like No Doubt, Face to Face and Sublime for a traveling festival that placed alternative music in the foreground. With a steady lineup of stalwart headliners and up-and-coming openers, the tour has flourished to become one of the music scene’s most sought after gigs. Now at the height of its awkward teen years, the Warped Tour’s skateboard features have taken a back seat, and the event has morphed into a summer tradition for youngsters needing their mainstream punk fix.

So in honor of its historical past and decade-and-a-half of culture-defining shows, Lyman and Warped Tour veterans have come together to make the first ever Warped Tour movie. But instead of theatrical releases for a retrospective documentary, however, the Warped Tour 15th Anniversary Celebration breaks as many conventions as the famous road show itself.

Thirteen bands – including Bad Religion, Blink-182, 3OH!3 and Underoath – gathered at Club Nokia over Labor Day weekend for a one-off concert, and footage from the live show has been combined with behind-the-scenes action to make a two-hour tribute to the iconic tour. The completed movie will screen nationwide in select theaters during Thursday’s one-night-only event, giving even those of us who left the painfully sweaty mid-July ritual back in high school a chance to relive some classic acts. 8 p.m.