Faith No More: This Is It: The Best of 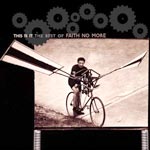 Five years and zero albums after their posthumous best-of, Faith No More returns with…another best-of album, this one with nineteen tracks instead of fourteen. Supposedly, they were one-hit wonders, so the 18 other tracks should be considered extraneous, until you realize the reason they only had one hit was because radio was too dumb (or too smart) to play their other stuff. Faith No More was five NoCal homo erecti who played five different things at the same time: Metallica guitar, Parliament bass, Rush drums, Enya-at-the-circus keyboards, and a vocalist somewhere between Pat Boone and Ozzy Osbourne. And that’s at their most normal!

As for subject matter, vocalist Mike Patton (and first singer Chuck Mosely, but who cares a lot about him?) gives us Transformers (they’re more than meets the eye), "it," ledge jumping, male oral sex (from the giver’s perspective!), and premature burial, but these songs aren’t really about anything. This Is It could be heard as a fascinating portrait of a band that tested the boundaries of popular music and discovered a gaping chasm on the other side, then jumped in anyway…but that would be defeating the point, which was that there was no point.