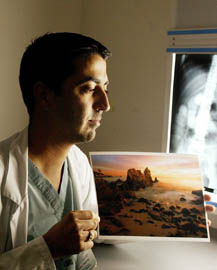 At first, it was amazing. Sacred. A cadaver. A human being who donated her body so that Sarah Mourra, 23, a first-year medical student at University of California, Irvine, could learn the art and science of healing people.

"In the beginning you walk up and you think, ‘This is skin just like mine. This person has hands just like my grandmother.’ You see these things, and it’s disturbing and powerful," Mourra said.

But then at some point – it’s hard to say when, exactly – the stuff of medical school ceases to be powerful. At some point, you stop reflecting on the life and beauty of the person a cadaver used to be, and you start rooting around a table with "five legs scattered about, looking for one with a good muscle to work with," Mourra said.

At that point, it’s time to take a break and go to the movies.

Film has been blamed for everything from creating violent children to destroying societal mores. But for students who feel as though they’ve become numb under the anaesthetizing effects of medical school, the movies can heal.

At least, that’s the premise of a paper by UC Irvine professors Drs. Johanna Shapiro and Lloyd Rucker, titled "The Don Quixote effect: why going to the movies can help develop empathy and altruism in medical students and residents."

The review suggests that seeing a kind doctor on the silver screen can help restore medical students’ faith in their field. The paper also has the distinction of finding redeeming value in Patch Adams. But more on that later.

Published in December in the journal Family, Systems, & Health, the paper is one of many on similar topics written by educators in the growing field of "medical humanities," an area focused on finding the link between art and the art of medicine. It’s a field that taps into the soul of the physician. It’s a concentration that reminds medical students that they’re here to save lives. It’s a field aimed at turning students into the kind of doctors that, well, that they see in the movies.

"You can teach about empathy from a didactic way, to good effect," said Shapiro, a professor of family medicine. "But if you think about empathy, you quickly realize it has other dimensions that can’t be conveyed didactically. That is something that can be done with a movie. You automatically have empathy for the characters."

Shapiro jokes that she sees 20- and 30-somethings in her Humanities in Medicine Program courses who complain of having lost their "youthful idealism."

"I guess it is replaced with youthful cynicism," she said. But listening to their stories, it can be startling how quickly sleep deprivation and grueling course loads can turn young caretakers’ thoughts to black.

A resident in one of Shapiro’s recent classes talked about working an emergency-room rotation. While awaiting two trauma cases, he heard one of the patients had died en route. "Great," he said, "We don’t have to deal with that one."

Medical students said their own cynicism startles them.

On her 16th straight day of a surgery rotation, when she was working 80-hour weeks with little sleep, Sayeh Beheshti, 36, of Irvine, walked into one of her patient’s rooms to find he had left the hospital against medical advice. He still had lines attached to his body. His decision put him at risk of infection.

"Instead of being concerned, I was just glad that I didn’t have to write his notes," Beheshti said. She did all the right things: She tracked the patient down, let his doctor know what had happened. But she did it without the kind of alarm she would have expected such a crisis to elicit. "I didn’t have the compassion left in me to really feel. I was just doing."

Beheshti said talking about the incident in Shapiro’s class helped. But writing and reading and going to the movies helps even more.

While Shapiro doesn’t think that artists and movie buffs automatically make better doctors, she said people who are open to the sway and sweep of the cinema can more easily remember why they went into medicine.

"It’s not that I feel ‘Humanities in Medicine’ is so important. I just feel that HUMANITY in medicine is," Meghann Kaiser, a third-year UCI medical student wrote in an e-mail.

Kaiser said exploring the art of writing has been particularly cleansing.

"The demands of my job force me to subvert my instincts, feelings and human reflexes in the interest of functionality," she wrote. "The exercise of confronting myself – interrogating myself on how and where my life and those of my patients have come to intersect – and then putting those primitive realities to paper, reminds me why I went into medicine to begin with."

For Kaiser, literature is the medium that helps center her. For others, it’s fine art, photography, dance or poetry.

Shapiro said she chose to focus her paper on film because movies are easily accessible and quickly capture viewers’ hearts. Her students agree.

"What I’ve noticed in movies is that it does carry over. Movies set the precedent for what’s acceptable and what’s not acceptable," Beheshti said. "I have movie flashbacks all the time."

Which brings us back to Patch Adams.

While widely panned by critics, the Robin Williams feel-good movie is a favorite among many medical students and residents who identify with the good-medical-student-stymied-by-the-system theme.

"The scene at the end where he’s wearing a hospital gown (to graduation): I thought that was so powerful," Beheshti said. "That’s one of the things that, when you’re a patient you’re naked and you’re very vulnerable. I thought it was cool that he was so sensitive to that."