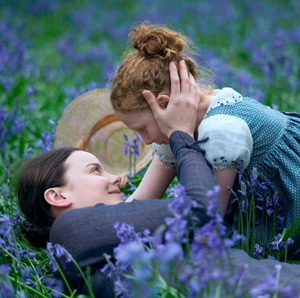 It shouldn’t surprise you to know that Jane Campion’s latest directorial effort Bright Star is a quiet, subdued film. It’s so placid that watching it seems like an intrusion, disturbing the scenes into shyness and its central characters, a pair of young lovers – the Romantic poet John Keats and his neighbor Fanny Brawne – into a continuous blush.

At one point they play a game with Fanny’s sister, freezing in playful positions whenever the little girl looks at them, and while watching Bright Star you might conclude Campion is playing the same game with you. Why won’t these people move, get out of the house, out of the garden, stop sewing, engage in a plot, begin an intrigue – we’re watching – but they remain frozen in that mood of sensual, contemplative romance that produces a lot of voice-over letter reading.

Campion’s talent is for spaces and texture. She’s lyrical. From her color palette comes the subconscious attributes of character. Here she delves into the rich subtleties of the English heathland, adding white and pastels and a coat color for Keats that signals the bad weather of his undoing.

Every production detail is in exact place, coinciding with the poet’s aesthetic practice of supercharging the senses. You can feel on your skin the coarseness of the hand-sewn costumes, you can smell the beds of blooming flowers, the country insects swarm in your ears. The butterfly opening and closing its wings in a mason jar becomes a gorgeous symbol for Fanny’s acute lovesickness.

In Bright Star, Campion has created a poem. It’s a poem written in the grammar of glances and body language, not consummation. But when that first kiss does play out, Campion momentarily releases the powerful beauty locked inside her filmmaking. The problem is she puts the lid back on it.

Abbie Cornish plays Fanny with a strong-willed ebullience on her good days and with the fury of heartbreak on the bad. She, not the poet, is Campion’s focus. Keats, the smoldering, elfin Ben Whishaw, is a boy of no prospects and ink-stained fingers.

They are modern lovers, rejecters of tradition and expectation, blessed with torturous passions in a century that couldn’t reward their obsessive behavior. Keats drifts capriciously in an out of the story, leaving Fanny devastated, her heart open and closed in a jar. There is not much more to the plot than that.

Campion’s script is inspired by and researched in their love letters. It is filled with lines spoken from Keats’ poems. It’s possible that in intending to film a poem, Campion has written a story not about a human romance but about words falling in love and humans falling in love with words, letters proposing to letters, sentences lip-locked beneath a tree.

But by losing the human element, the reality of Keats’ illness is sacrificed. His death happens off screen, off stage and the hard tragedy of Fanny’s loss can’t rise out of the ethereality of Campion’s style.