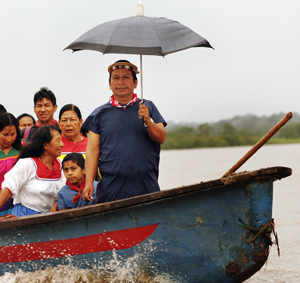 In case you haven’t been paying attention to the news lately, Chevron has been under the microscopic lens of the media for their politically charged actions in regards to where and how they send their oil. In the Asian country of Burma, the company openly supports the military dictatorship that has terrorized the nation for years, leading to the crackdown on Buddhist monks who were peacefully protesting.

Burma Global Action Network (BGAN) launched a campaign urging consumers to boycott Chevron Corporation in order to encourage those companies to divest of their substantial assets in the country so as to cut off the direct pipeline of support that fueled the dictatorship.

Crude exposes one of the most controversial environmental lawsuits in history. The infamous “Amazon Chernobyl” case takes place in the Amazon jungle of Ecuador where over 30,000 indigenous dwellers were forced to watch their natural habitat contaminated, creating an alleged “death zone.” They claim that Texaco, which merged with U.S. oil giant Chevron in 2001, poisoned the water, air and forest in the span of over three decades.

Cancer, leukemia, birth defects and a plethora of other ailments have begun to plague the residents. The film opens with an interview with an elder of the tribe who describes the breakdown of the tribe’s traditions due to the presence of the greedy oilmen.

Chevron ferociously sticks to their story, saying that those accusing them of malicious actions are merely trying to get money out of the multi-billion dollar company. The case got international recognition by celebrities, politicians and journalists, even landing on the cover of Vanity Fair.

What is most amazing about the film is director Joe Berlinger’s incredible access to the case, shooting on three continents and in many languages, as well as in and out of the courtroom. Berlinger traveled through the murky jungle waters to interview the people most affected by the pollution.

Unlike most modern documentaries that seek to test the viewer’s sense of reality, Crude is undoubtedly about the real, excruciatingly poignant battle over property ownership. Although the issues with which the film deals are relevant and pertinent to everyone’s lives, the film often feels like an episode of “20/20,” except it’s especially long.

If you don’t know or care about the mess Chevron has made worldwide, maybe you should check out this small film that is as informative as it is timely.