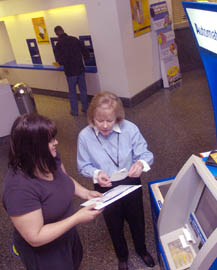 From the gas that people pump themselves to such brave new frontiers of do-it-yourself-land as the self-serve checkout kiosks at Wal-Mart and Home Depot stores, American consumers are shouldering an ever-growing chunk of the work involved in everyday transactions.

The explosion in self-serve options is generating a backlash. Communications experts say people are more isolated than they used to be in the days of face-to-face service, and other observers question how much time people are really saving if they must constantly adjust to new machines, absorb new instructions and deal with the inevitable snags.

"We’re exhausted doing all this work," said Nicols Fox, a writer at work on a book called The Case Against Efficiency. "There’s just so much that we’ve been asked to take over. I think we’re reaching a breaking point here."

Hardly anyone disputes that the information age has brought many benefits. Many like the convenience of zipping into a bank to get cash from an automated teller and relish the freedom of going online at 3 a.m. to order steaks from Omaha and salmon from Seattle.

In the last three decades, ATMs have grown from a novelty to commonplace, with more than 371,000 machines in use.

The more recent arrivals – self-service ticketing for such things as subways, buses or movies, and do-it-yourself cash registers – racked up $128 billion in North American sales in 2003, up 80 percent from the previous year. Such transactions could reach $1.3 trillion by 2007, according to a study by IHL Consulting Group.

And the Census Bureau reports retail sales over the Internet reached $69.2 billion last year, up 23.5 percent from 2003.

In the latest breakthroughs in self-service, hotel chains, including Hilton, Hyatt and Sheraton, have started introducing check-in kiosks at some of their hotels, letting travelers with reservations select or change a room, request upgrades and encode their key cards.

And McDonald’s is testing a self-serve station where customers can place orders, pay for their food, and then go to a counter to pick up their burgers and fries.

Perhaps most remarkable, the U.S. Postal Service – an institution not known as an "early adapter" of innovative technology – last year started putting self-service machines in its facilities, allowing customers to weigh envelopes or parcels, select the service they want, pay for it and print out their own postage labels.

"I think the post office is the acid test," said Alex Halavais, a communications professor at the State University of New York at Buffalo. "Now that that’s making the move to self-serve, I think we’ve really reached the last bastion."

But with the explosion of self-serve options, some question what the effect has been on one of mankind’s most important attributes – the ability to communicate.

Cherie Kerr, a public speaking and communications consultant, expresses amazement at the number of people she deals with who would rather exchange e-mail than talk on the telephone.

"People are just not connecting as much as they once did or as they should," said Kerr. "A lot of people do not want to talk to people anymore."

And many observers fear that new developments in do-it-yourself technology will exclude the elderly or the poor, especially as companies start charging customers a premium for doing business the old-fashioned way.

In at least one instance, the answer to the growth of self-serve technology may be more technology. One of the hottest potential developments in retailing is radio-frequency identification, tiny computer chips that transmit information about the products in which they are implanted. With such a system, shoppers will even be able to dispense with the whole process of going to the cashier or scanning their purchases themselves.

Instead, a device near the exit will record the radio signals being emitted by the merchandise, add up the bill and charge a customer’s credit card.