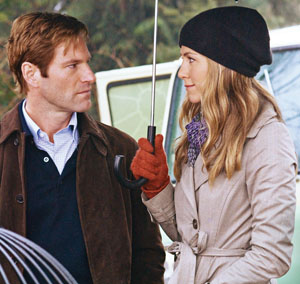 Molasses: This confection is slow moving and syrupy sweet. That was the first comparison that came to my mind during the drama, Love Happens.

In it, Aaron Eckhart plays Burke. He’s a motivational speaker and grief counselor in Seattle on a very important leg of his national tour.

While perusing his hotel, he makes the acquaintance of a quirky florist named Eloise (Jennifer Aniston). The two get off to a rough start with each other, but soon they begin dating, and a courtship blossoms.

However, during a night out on the town, a secret Burke’s been harboring comes to light – forcing him to live up to and deal with the death of his wife who was killed in a car accident three years earlier. Burke learns that in order to give advice, he must first practice what he preaches.

Love Happens is an excellent movie to see for anyone who needs well-timed words of wisdom or self-help without the embarrassment of journeying to Barnes & Noble to get it. It has great acting and some really fun moments (including a cameo by the band Rogue Wave). However, it’s one of those films that might make you squirm with discomfort if you are cursed with a short attention span.