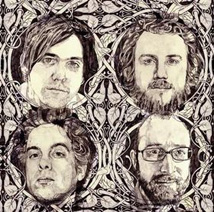 One of my all-time favorite concerts was when the Monsters of Folk hit the Orpheum Theatre in 2004. The band members – My Morning Jacket’s Jim James, Mike Mogis and Conor Oberst of Bright Eyes and M. Ward – provided musical backup for each other’s sets every night on stage, while offstage they began writing tunes together as Monsters of Folk.

From the opening track, “Dear God (sincerely M.O.F.),” of their self-titled debut, it’s striking how well their musical styles and individual voices mesh and meld together into a delightful mélange of insightful and thoroughly engaging songs. It’s not often that an album is so engaging that listening to it can completely tune out the rest of the world for an hour or so, but Monsters of Folk succeeds.

Monsters of Folk is currently available.