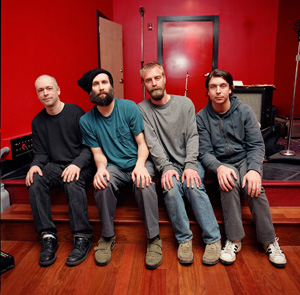 There is No Enemy celebrates Built to Spill’s 16th year together.
(Credit: Autumn DeWilde)

Quite a lot of amazing music is being crammed into this season of releases. So let’s jump right in, shall we?

Backtracking to Sept. 8, ANTI- released the return of decades-old Brazilian pop group Os Mutantes, Haih or Amortecedor (now with a revamped lineup). The always-amazing Polvo returned to Merge after a decade-plus hiatus with the brilliant In Prism, which still has dueling guitars and Ash Bowie’s charming lisp, as hoped. And New Zealand’s the Clean put out Mister Pop, also on Merge.

Then, there was After Robots (Secretly Canadian), a prog-percussion adventure by South Africa’s BLK JKS, a return from all-girl garage group Vivian Girls (Everything Goes Wrong, In the Red) and a beautiful (not to mention long) new Yo La Tengo record (Popular Songs, Matador).

Oh, but Sept. 15 was nothing to scoff at; Tyondai Braxton, Battles frontman and son of jazz musician Anthony Braxton, released Central Market (Warp) – check out the mind-blowing “Uffe’s Woodshop” – and Violent Femme Gordon Gano put out a folk-pop record with the Ryan Brothers (Under the Sun, Yep Roc). He plays violin? Yep.

Also out on the 15th were a lovely eponymous release from San Francisco Americana folkers Or, the Whale (Seany) and lo-fi punkish rock from the Fresh & Onlys (Grey-Eyed Girls, Woodsist).

Here’s where things get really good, though – Sept. 22. First, a much-needed full-length follow-up from Scotland’s utterly beautiful, noisy shoegazers the Twilight Sad, whose Forget the Night Ahead (FatCat) was produced in part by guitarist Andy MacFarlane, a man who can play the hell out of a Jaguar. Also on the lo-fi end of things, we’ve got new releases from fuzzy, late-’80s-style group the Pains of Being Pure at Heart (Higher than the Stars, Slumberland) and Times New Viking (Born Again Revisited, Matador).

TV on the Radio’s Kyp Malone, dear bearded one, is releasing a solo record on ANTI- (Rain Machine), and Jagjaguwar is putting out the lovely Unmap by Volcano Choir, which features Justin Vernon of Bon Iver fame.

Earlier this year, Black Keys guitarist Dan Auerbach went the solo route, so drummer Pat Carney was all, “me too, me too,” and now he’s in a new project called Drummer, whose Feel Good Together (Audio Eagle) comes out Sept. 29. Drummer is very indie rock, Carney plays bass, and they’ll be at the Echo Dec. 3. Rumor has it that the Black Keys have been doing some recording...

Oct. 6 is a big happy mess that’ll have aging indie kids practically giving away their paychecks. Really bleedin’ good punkers Mission of Burma are putting out The Sound the Speed the Light (Matador) – see them at the Echoplex Nov. 15 – while Built to Spill’s There is No Enemy (Warner Bros.) marks the Idaho group’s 16th year together.

Prior to touring as an opener for his own band, Dinosaur Jr., the ever-foxy Lou Barlow will release Goodnight Unknown (Merge). And Exene Cervenka, now battling multiple sclerosis, is putting out Somewhere Gone (Bloodshot), while Philly-based folker Kurt Vile’s got Childish Prodigy (Matador) prior to an Oct. 23 appearance at Spaceland.

Certainly not to be missed, also on Oct. 6, is this year’s sophomore effort from A Place to Bury Strangers, Oliver Ackermann’s noisy Skywave spin-off. These guys take pride in their effects pedals – do them a favor and hear them out by picking up a copy of Exploding Head (Mute), then checking out their set at the Echo Oct. 16.

French producer Etienne Jaumet will release a solo debut (Night Music, Domino), and the ultra-hairy Califone will put out All My Friends are Funeral Singers (Dead Oceans).

The following week (Oct. 13) brings a Kill Rock Stars re-release of the Raincoats’ 1980 self-titled debut, worthwhile if only for their jagged, twice-gender-bending cover of the Kinks’ “Lola.”

On Oct. 20, we see yet another return from lady-Brits and reggae-punk rockers the Slits, with Trapped Animal (Narnack); they’ve got sort of a merry mother-daughter vibe these days, what with Paul Cook’s daughter prancing about under Ari Up’s locks of rope, but this may be a worthwhile return.

Meanwhile, Julian Casablancas of the Strokes has got his own solo record to show – given the band’s track record for solo releases, it was sort of inevitable. Turns out he’s a multi-instrumentalist with a classical influence, and his Phrazes for the Young (Cult/RCA) is an exorcising of ya-yas prior to the upcoming Strokes release, tentatively set for spring 2010.

This week also brings the return of Themselves, a side project from Jel and Doseone of Subtle, whose six-year hiatus ends with CrownsDown (Anticon), just one week after the return of fellow hip-hop group Anti-Pop Consortium (Fluorescent Black, Big Dada). A showdown between Beans and Doseone? Perhaps.

Month’s end (Oct. 27) sees a new release from elegantly aging Liverpudlians Echo and the Bunnymen, whose recent live Ocean Rain performances did an excellent job in setting the stage for upcoming record The Fountain, as well as a Nokia Theatre performance of Ocean Rain set for Oct. 24. The new tracks are all right, but the Ocean Rain live set is a must-see.

Also set for the end of October is a new release from Portland’s Quasi, who are bringing in bass player (and fellow Jick to Janet Weiss) Joanna Bolme.

There’ll be a return from doo-wop garage pair the King Khan and BBQ Show Nov. 3, and with Invisible Girl (In the Red), a break from Khan’s long detour with the Shrines, comes an appearance at the Troubadour Nov. 17. It will almost certainly sell out, so if you like to dance, buy a ticket now. Or sooner.

If you don’t like dancing, skip King Khan and BBQ, and instead check out Will Stratton, a singer-songwriter from New Jersey who’s been recording since he was fresh out of high school. Stratton writes and arranges some gorgeous folk ballads, heavily influenced by Nick Drake, and is using sophomore release No Wonder (Stunning Models on Display) to build on his quietly beautiful debut from 2007.