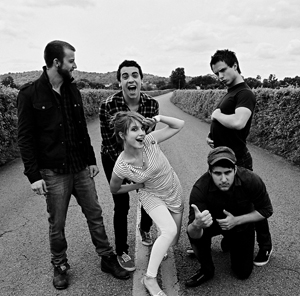 Paramore hit the road this fall with their third full-length album.

Sigh. Where do I start with this band? Many years ago, there was a small, largely unknown, girl-fronted band I interviewed at the Vans Warped Tour. Somewhere along the way, that little band that could became a top-billed headlining act, and that fiery-haired girl next door on singing duties became a stage-commanding vocal powerhouse and the face of a whole genre of music.

Needless to say, I’m having a proud parent moment with this band as they prepare to release their third full-length album. And yes, I’m totally swiping some credit for helping break this band.

This is the last one! I promise! I’m sorry! No more “Idol” contestants … until Kris Allen goes on a solo tour.

It pains me terribly that these guys have never really gotten the attention they deserve despite all they’ve been through as a band. They’ve endured hardships that would break a lesser band, and they’ve come out stronger, better musicians because of it.

Like most of the bands they surround themselves with, the Jersey natives are constantly reinventing themselves, but in a way that’s still true to who they all are as musicians. Never ones to shy away from being experimental, sometimes at the cost of support from older fans, the six-piece are artists in every sense of the word.

The first of Brand New’s two L.A. shows just so happens to fall on my birthday, so I’m taking it as a sign from the rock gods that I need to be there for the occasion. Accordingly, I’ll assume frontman Jesse Lacey is serenading me with each masterfully written and painfully emotive song about heartbreak, anxiety, emotional trauma and existential crises.

Given the number of times I’ve suggested y’all buy other musicians a drink when you go to their shows, maybe I’ve earned enough good karma for someone to buy me one this time. I’ll probably need it by the end of this show.

M. Ward + Conor Oberst = me having an indiegasm. Both of these men individually prove challenging to string together descriptive words that will do them justice, so suffice to say the two of them on stage together has me a bit stumped for what to say. But really, should I even have to say anything this time?

Amidst all the bands I love because they write deep, introspective, thought-provoking musical insights into the human condition or whatever, there has to be a special place for the bands that are simply my feel-good bands. Not that there isn’t meaning behind the music, but the bands I put on when I need to get stoked on life again.

At the top rank of those bands belongs to none other than Swedish synth punks the Sounds. I’m not so much the dancing type, but this band makes me wish I had some actual rhythm to display with them as my soundtrack.

Like Ward and Oberst, Death Cab for Cutie frontman Ben Gibbard can do no wrong in my ears. Though I assuredly have favorites within his body of work, Gibbard has yet to disappoint me with any of his output. Masterfully intellectual in his approach to songwriting, I feel a little bit smarter every time I listen to Gibbard sing about even the most mundane of subjects.

Easily one of my favorite albums so far this year, the There for Tomorrow dudes write everything I could ask for in a song: infectious beats, lots of guitar riffs and the occasional gang vocal bit. It’s easily the most anthemic sounding pop music out now.

The always charming-in-a-slightly-awkward-way McMahon has you in love with his heartfelt brand of melodic rock from the second his fingers hit the keys on his piano.

Even after perusing the Web site for this event, I still don’t really get it, but then I’ve never much been the camping-in-the-desert-for-a-music-festival type, either. I like electricity and indoor plumbing too much.

But regardless, I welcome anyone who goes to bring me back details of all the dirty and sweaty jam-band fun they have while there. Look for me in my hot tub when you get back.

I shouldn’t even have to explain this one. Rock icons. Awesome show. Go buy tickets. Now.

It’s like getting to hand pick some of the best acts across multiple genres from this year’s Warped Tour and being able to see them somewhere that won’t be interrupted by a Jeffree Star performance. What more could I ask for in life?

Needless to say, it’s only appropriate I close this guide out with my most anticipated show of the season, the one and only Thrice. The Orange County-bred foursome have turned out another amazing record with Beggars, of which all the songs beg to be performed and heard live.

The hard part now is waiting to see which songs from their seven-album history the hardcore-turned-indie-prog rockers select for their set lists each night. Known for having a constant rotation of tracks in their set lists, I’m just saying it’d be worth your while if you were to hypothetically go to all three nights.