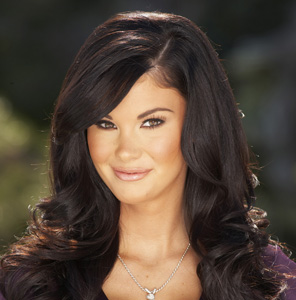 She’s Brody Jenner’s girlfriend, the one who got caught in the middle of the love triangle between herself, Brody and Audrina Patridge, but there’s a lot more to this reality show star than MTV’s “The Hills” allows viewers to believe. This small-town girl from Ontario began modeling when she was 5, walking a bountiful amount of runways and participating in various photo shoots.

Nicole modestly states, “I didn’t think I ever had a chance at winning it,” but she was eventually named 2008’s Playmate of the Year, making her the first Canadian playmate in 26 years.

More than just a pretty face, Nicole’s also a smart businesswoman. She started her own modeling agency so she could avoid working with rude, unfamiliar models, and she’s currently in the midst of creating a pilot featuring herself and a few other playmates.

In addition, Nicole uses her fame to help others. This vegetarian and supporter of PETA says, “I don’t claim to be able to save the world,” but between animal charities and rescues and the Protect the Seals Campaign, she’s doing a pretty good job of protecting them. She’s also working with Pantene’s Great Lengths program to make wigs for cancer patients of all ages, and she’s currently in the process of writing a book full of health and beauty tips for the average woman.

Nicole is aware that her modeling career will eventually come to an end: “I know I can’t model forever, and I don’t want to model forever.” But she plans to continue helping others and wants to hold onto her infatuation with health and beauty by opening her own spa.