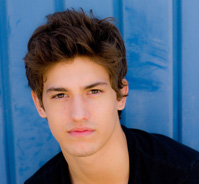 Asher Book was known as AshTheCash in high school, because he used to always carry cash in his pockets. Perhaps it was a premonition, as the 21-year-old multitalented artist is now digging deep into Hollywood’s pockets with his latest artistic projects - as a singer in the boy band V Factory and one of the lead actors in the upcoming movie, Fame.

Currently on tour to promote the band’s fall album release, Book says the public’s reception has been positive and has also raised his optimism on the band’s competitiveness in the cutthroat music industry.

“We are unique because we have our own vibe, we have edgy personalities and we choreograph our dances,” he says.

Their debut single, “Love Struck,” with its catchy R&B beats and urban influence representative of the album’s sound, has earned a No. 37 spot on the Billboard chart and No. 70 on the Pop 100.

Their busy touring schedule, however, hasn’t deterred Book from indulging in his passion for acting. He was involved in the reinvention of the 1980 Oscar-winning film Fame, a musical about a group of New York’s High School of Performing Arts students vying for real and lasting fame, as a lead actor named Marco.

A former student of the performing arts school that the new Fame movie was filmed in, Book was immediately taken by the script’s accuracy in portraying the students’ reality of hard work and dedication to achieve their dreams that are often downplayed in contemporary movies of a similar theme.

“I can relate to the characters and their experiences, it’s what artists really go through,” he says.

Book thinks that the movie will teach a valuable lesson to the audience.

He says, “It shows you need to follow your dreams, and you can accomplish anything if you put your heart and soul into it.”