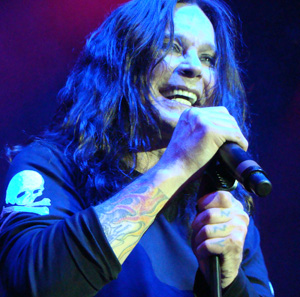 The Sunset Strip Music Festival packed a heavy-hitting lineup for a day that not only proved historic by creating the boulevard’s first closure for an outdoor event, but also for bringing Ozzy Osbourne back to the Strip in over 40 years.

Things kicked off with ska-punk legends, Fishbone, who proved not all good things are saved for last. Their funky set was augmented by keyboardist Chris Dowd and vocalist/saxophonist Angelo “Dr. Madd Vibe” Moore, who routinely crowd surfed while never missing a beat. During “Alcoholic,” Fishbone paid tribute to Ozzy by playing an interlude of “Iron Man.”

The Donnas rocked the West Stage a few feet away with crowd favorites “Wasted,” “Smoke You Out” and “Get Off.”

Then, the Kottonmouth Kings started their intentionally delayed 4:20 p.m. set on the East Stage. Oddly, the most outspoken member of the outfit was Pakelika, who didn’t say a word, but marched around the stage with a Cheech & Chong-sized blunt in one hand and a Chivas tequila bottle in the other. He would routinely flash, “Why haven’t the troops come home yet?” and “Shout out to the firefighters” posters and proudly wore a shirt that had “Why isn’t weed legal yet?” scrawled on the back.

Pepper kept the crowd laughing and rocking out with their ska-reggae set. Interspersed with humor and perspective on the festival’s meaning by the Mayor of West Hollywood, Pepper played perfect setup to ’90s nu-metal pioneers Korn, who played mostly newer material, but included fan favorites “Blind,” “Freak on a Leash” and Pink Floyd cover “Another Brick in the Wall.”

Ozzy closed out the festival with his 45-minute set that included “Suicide Solution,” “Bark at the Moon” and “I Don’t Wanna Stop.” He played on the crowd’s ferocity by showering them in foam. At 60, Ozzy had the Sunset Strip livelier than a routine Friday night. Just goes to show that nothing can stop the fucking Prince of Darkness.