Alice In Chains: Come Together 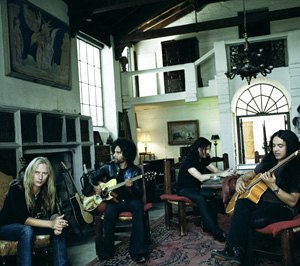 Much has been made about Black Gives Way to Blue being Alice in Chains’ first studio album in 14 years, as well it should. The band hasn’t consistently played together since the mid-’90s, while original vocalist Layne Staley died from a drug overdose in 2002.

“For all intents and purposes, it is kind of a new start,” guitarist Jerry Cantrell admits. “It’s an odd dynamic of being an established band, having a long career and having an impact, and taking on the challenge we have and continuing forward. It’s kind of exciting that way.”

Cantrell, bassist Mike Inez and drummer Sean Kinney first regrouped for a benefit concert in 2005. The following year, the band added William DuVall, whom Cantrell had toured with previously, to the mix. The four decided it was time to tour, unsure exactly where it would lead them.

“We, of course being musicians, started writing material,” Cantrell laughs. “The quality of the material we came up with and the work ethic that that sparked to create some cool stuff seemed to answer that question for ourselves whether that was even something we wanted to do.”

Armed with a renewed passion, the group would spend almost two years working on Black Gives Way to Blue.

“You really just have to start fresh with no real expectations, other than having the benefit of the knowledge of what you can do and what you have done,” Cantrell notes. “You want to create something new that is recognizable and connected to the past, but you want to try and progress. You want to write better material and you want to write new material.”

During the sessions, Cantrell shared singing and lyric duties with DuVall, and they even got Elton John to play piano on the title track. As Cantrell points out, a teamwork mentality has always been one of the band’s strong suits.

“That’s what this band has always been,” he says. “Although maybe some of us get a little more recognition than others, it’s really a band. It’s never been about particularly one individual. It’s a combination and a blend of all of us together and what we all bring.”

“That’s true in other areas of the band as well,” Cantrell adds. “We all rely on each other quite heavily. I think it’s a great record, and I’m even more proud of all of the growth that we’ve gone through.”

As has always been the case, the record is directly drawn from the band’s experiences, complete with its trademark dark undertones, and several of the songs were influenced by Staley.

“It’s a personal snapshot of where we are now, what we’ve come through, what we’ve lost and also what we’ve gained,” Cantrell explains. “Layne is always going to be an indelible mark. You can’t hide it and we’re not trying to. We’re more celebrating it, and also celebrating the fact that there’s a lot of life left to live.”

“Some of the worst things in life that happen to you are not your fault, but what is your responsibility is how you deal with it,” he continues. “It takes a lot of effort, personally, to take on the challenges of life and to own all the aspects of what your life has been, the bad parts and the good parts. That’s what makes a life.”

Cantrell admits he’s lucky to have the band to fall back on, which has become like a second family for him.

“We’ve done this band for half my life, over half my life, and I’m still with my buddies,” Cantrell says. “I can’t think of anybody else on the planet that I’d rather be spending time with than the guys in the band.”

So with everything that’s changed over the past decade, not to mention the upheaval in the music industry, what has Cantrell learned?

“I think the only thing you can rely on is what you’re doing and why you’re doing it,” he reflects. “You got to roll with the changes and figure it out as you go along. There’s no rulebook as far as I’ve ever found, and if there is one, I wish I would have got one. You kind of just make it up as you go along.”

Black Gives Way to Blue will be available Sept. 29. Alice in Chains will perform Sept. 29 on Jimmy Kimmel and Sept. 30 at the Avalon. For more information, visit aliceinchains.com.