Our Noise: The Story of Merge Records 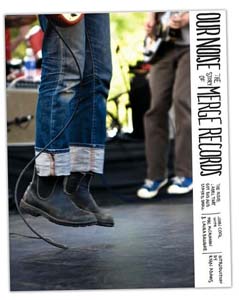 There’s a fantastic romantic quality to Our Noise, a detailed glimpse at the history of Merge Records, that will delight the geeks who revel in ’90s culture or those who visit their local record shops and walk home embracing their loot until arriving at home and promptly playing their discoveries.

Built from interviews with, among others, members of Superchunk, Magnetic Fields, Arcade Fire and Butterglory (Yes, Butterglory addresses the “who the hell is Butterglory?” question.), Our Noise is indulgent to Merge founders and Superchunk core Laura Ballance and Mac McCaughan. It details the overlap between the band that financially supported the label, the label that supported the band and the relationship between Mac and Laura, which devolved and could have threatened either of their projects (Though, as it turns out, Superchunk released its first material since 2001 around the same time this book was completed.).

The book also makes Stephin Merritt and Jeff Mangum appear on opposite ends of the unlikable/likeable spectrum of misfits, explains the problem with having digestive troubles on tour and reveals that Lou Barlow will run the other way at first mention of a major label deal. A great look at the little label that’s been run out of North Carolina homes and has managed to spawn some unexpected Big Deals.

Our Noise is currently available.