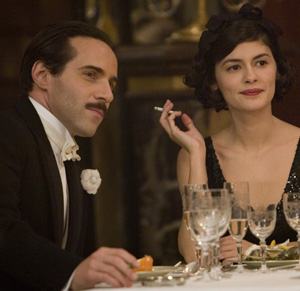 I’m beginning to realize that Audrey Tautou really can’t do anything wrong. Well, OK, maybe The Da Vinci Code was of questionable quality, but her acting made that flick bearable.

Now that she’s done with that franchise (and Tom Hanks’ ridiculous hair), it’s good to see she’s moving on to bigger and better films. Real films that are more than just cars getting blown up … films that are art. Like Coco Before Chanel.

Everyone knows who Coco Chanel is. You’ve likely seen her designs (even if it was just in that one episode of “The Simpsons”) or smelled one of her perfumes. But how did this French orphan come to be such a huge name in the fashion world?

The film chronicles the life of Gabrielle “Coco” Chanel (Tautou) from her humble beginning as a chaste singer in a cabaret filled with drunken soldiers. But when she catches the eye of Étienne Balsan (Benoît Poelvoorde), a wealthy socialite with a taste for horse racing, Chanel makes it her business to use his status and money to create a better life for herself, even if it means becoming his mistress and entertaining his status-obsessed friends.

The one thing she doesn’t bargain for is falling for Arthur “Boy” Capel (Alessandro Nivola), a charming British businessman. He loves her individuality and embraces the way she pushes the bounds of societal expectations, valuing simplicity and form. He encourages her to pursue a career instead of languishing away on Balsan’s estate, and he even finances her first studios. But her happiness is not to last.

While Coco is a period film, it has none of the overly lavish costumes and locations that marked productions like Elizabeth or Gangs of New York and none of the pretension. Yes, there is a lot of attention paid to detail and authenticity when it comes to both the costumes and the environment. You can actually smell the cigarettes Chanel smokes when you watch it, but it also makes fun of the ridiculous fashions of the period and highlights the simplicity and elegance that marked Chanel’s designs.

It’s a complete understatement to say that the acting and screenplay is phenomenal – none of the actors give a merely OK performance – but Tautou and Nivola blow everyone else out of the water with their smoldering love affair, and Emmanuelle Devos shines as the flighty Parisian actress Emilienne.

In the end, Coco Before Chanel is just like one of Chanel’s designs: tastefully understated but undeniably refined.