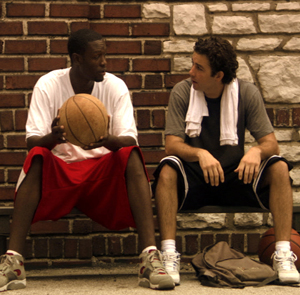 Like most sports flicks, the game comes secondary to the relationships of the characters. Who would watch Rocky if all he did was throw punches? Would we have even seen Miracle if we hadn’t heard it was based on real people and events? Caddyshack features an animatronic gopher, for goodness sake. And let’s be honest, the game may be fun, but it’s the people, the stories, the underlying drama that entices the average person and maintains every sport lover’s addiction.

The new film by fresh-faced writer/director/actor Matt Krentz is no different. Streetballers depicts the lives of John Hogan and Jacob Whitmore, two junior college basketball players who find their release on the street basketball courts where competition is born.

The game is no longer just a ball and two hoops. The players claim poetic and artistic license over basketball’s fundamentals in order to find sanity in the midst of their chaotic personal lives. Alcohol, drugs, death and dating are the troubles that plague the players who are trying so desperately to leave them behind when they take to the court.

Both men must help each other remain sane through the adversity facing them on the streets. Jacob needs help in school, especially after he is suckered into playing in an underground league to keep his cousin alive and out of debt. John is still struggling in his relationship with his brother, Michael, who is released from jail after spending four years behind bars for killing a neighborhood boy in a drunk-driving accident.

John is kept grounded by his new girlfriend, Sarah, despite the fact that he frequently spends time on the basketball court talking to the ghost of the neighbor boy. Likewise, Jacob is conflicted by the allegiance he feels to his cousin and his dreams of leaving the dangerous streets for a college career.

Krentz is the true star of this little wonder that succeeds in balancing the family melodrama with action basketball. His directing is impressive enough, but taking in the fact that the 33-year-old also has a starring role in the film fully portrays his breakthrough talent.

Streetballers is a detailed, expressive, wonder-full film that might not make you cry, but it will get you to thinking about more than just the immediate. You don’t have to love basketball to love this story of redemption, inspiration and courage.