The Boys Are Back: Clive Owen faces parenthood — alone. 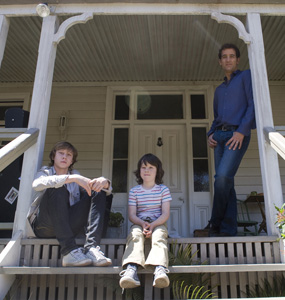 (l to r) George MacKay, Nicholas McAnulty and Clive Owen in The Boys Are Back
(Credit: Matt Nettheim/Courtesy of Miramax Films)

Never work with animals or children.

These cardinal rules of filmmaking were the first ones thrown out the window when Clive Owen and Scott Hicks, the Academy Award-nominated director of Shine, set out to make The Boys Are Back, a film adaptation of Simon Carr’s memoir. The story, set in South Australia, making it the first film Hicks has shot there since Shine, is the story of Joe, a sports reporter who loses his wife to cancer, leaving him to raise two sons in a home devoid of female oversight, which quickly descends into a haven for pillow fights, water balloon sneak attacks and pigsty dishevelment.

Sitting down to discuss the film at Palihouse in West Hollywood, Owen, exuding an air of international man of mystery in a crisp grey suit and loosely unbuttoned white shirt, and Hicks, his elegant long grey hair tucked behind one ear, are passionately effusive about the quality of the young actors in the film.

George MacKay, who some audiences might remember from Defiance, was only 16 at the time the film was shot, and Nicholas McAnulty is a 6-year-old newcomer whom Hicks discovered. Owen describes MacKay, who plays his teenage son, as “super skilled, a very fine actor,” while Hicks gushes, “He’s a brilliantly equipped young actor; seriously intent and very focused. He’s a proper actor, albeit a fledgling one.” Meanwhile, McAnulty was a gem Hicks spent months searching to find, though still one in the rough.

The knowledge that a significant chunk of the film rested on the performance of an unknown, totally inexperienced actor was something that kept the director up many sleepless nights, but he says he’s thrilled with the work the boy was able to deliver.

“Nick is completely raw,” Hicks explains, “so my task as director was to coax him through, knowing he was capable. But to say it was a cakewalk would not be quite true,” he adds with a chuckle.

When asked if working with such a young talent was daunting on the other side of the camera, Owen smiles.

“I loved it,” he replies, “but it was challenging, and I was nervous. If you’re too controlled around a kid of that age, you look like you’re acting because they’re so alive, loose and available. Nicholas was unpredictable, hugely talented and very bright, but unpredictable.”

Of course, it was a great boon to McAnulty that he was working with Owen, an actor Hicks holds in tremendous esteem.

“It’s like you’ve been given a Rolls-Royce,” he swoons, a smiles stretching across his face, “you have someone who comes so fully equipped at the highest level. He’s like the Tiger Woods of acting. He makes it look so easy, he carries it so well, with so little fuss and such good grace. Clive was meticulously prepared, to the syllable, and yet so at ease with the process that waves of good feelings emanate from him.”

Owen, who served as an executive producer on the film as well, is quick to return the compliment to Hicks, who set out to tell a story, which could easily sink into pat, clichéd, Hallmark movie channel formulas, in an honest, simple, personal way that has “a quasi-documentary feel.”

“Making a small, human film; it’s a struggle,” Owen sighs. “He and I made a pact about what this film was going to be. It wasn’t a sentimental film. It had to be tough, and finding that balance was the task. It’s not a heavy-handed film at all. It’s more delicate and that comes down to Scott and his delicacy. We were very much in tune with the film we wanted to make.”

The Boys Are Back releases in select theaters Sept. 25.