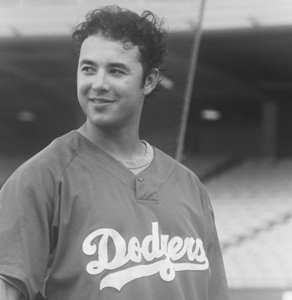 It’s that time again! The days are getting shorter, nights touched with a chill, the leaves are turning colors and that brutal bloodbath known as football once again litters the tube. But before we descend into the bitter months of winter, a mighty contest of a more civilized game must be decided. That’s right, major league baseball postseason is set to begin in less than two weeks and barring a monumental collapse, the Dodgers will be part of the action.

“Our destiny is in our own hands,” said manager Joe Torre after a recent victory, which edged the Blue Crew still closer to clinching the Western Division.

This sort of prophetic talk is growing more frequent around the clubhouse as the prospect of postseason play appears inevitable. It has been a long season, fraught with highs and lows of every variety from freak injuries and suspensions to miraculous comebacks and surprise heroics. Yet despite all this, the Dodgers appear to be riding the storm as they emerge through Sept. 20 with the best record in the National League.

“We stay pretty even keel,” commented catcher Russell Martin on how the team has handled the ups and downs.

When asked if he was ready for October, Martin replied, “More than ever. That’s the reason I play this game, for the big games … I love it!”

While big games in October seem imminent at this point, Torre doesn’t diminish the importance of the last dozen games of the season. The focus now is on securing home-field advantage in the playoffs with the prize going to the team with the best record of the regular season.

If they continue to play as well as they have in recent days, the Dodgers could very well claim the honor. Led by the reemergent Martin and the late season acquisition of infielder Ronnie Belliard, the offense has come alive.

“Mr. Miracle” Andre Ethier has continued to astonish with his unique gift for dramatic clutch hitting. Last week’s walk-off homer against the Pirates made Ethier directly responsible for half of the team’s 12 walk-off wins this season.

The starting pitching has shown uncommon consistency of late with Hiroki Kuroda and Randy Wolf both putting in consecutive quality starts, while newcomer Jon Garland has been undefeated since arriving last month. Most impressive of all is the sudden resurgence of the bullpen as one of the best in baseball. Closer Jonathan Broxton has regained his mastery over pressure situations, while recently acquired middle reliever George Sherrill has been nothing short of dominant. These factors indicate a very high probability of champagne bottles bursting over blue uniforms in the very near future.