The Gates of Slumber: Hymns of Blood and Thunde 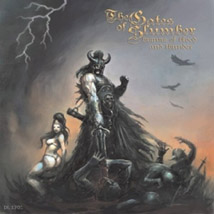 Listening to the latest from the Gates of Slumber, I half-expected to see explosions and a lightshow right in my living room, because this is unabashed arena rock. The many riffs and bluesy guitar solos are nothing less than an homage to the New Wave of British Heavy Metal circa 1979-1980.

Opening song “Chaos Calling” is a good overture to the songs that follow, sounding like what the Obsessed might have been like with a more technically adventurous drummer. “Wino” Weinrich’s Spirit Caravan, which followed the Obsessed, is probably a better comparison to the Gates of Slumber, since they both play a purist kind of old school metal. Karl Simon’s vocals even sound a lot like Weinrich’s.

The addition of the droney, acoustic “The Mist in the Morning” gives this album some dynamics you might not expect from the “World of Warcraft”-style cover art.

Hymns of Blood and Thunder is currently available.