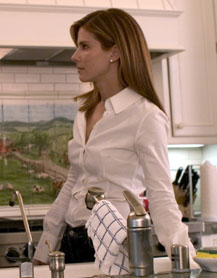 Is everyone in Los Angeles racist?

Crash would say everyone everywhere is racist, and admitting it is the first step toward dealing with it.

Written and directed by Paul Haggis, the new Crash seems, at first, like a reiteration of the themes in the David Cronenberg Crash, which used colliding cars as an extreme example of benumbed people reaching out to each other. Early in this Crash, a character played by Don Cheadle suggests, “We miss (touching other people) so much that we crash into each other so we can feel something.”

It soon becomes apparent the real problem for all the characters in Crash is race: A hostile socialite (Sandra Bullock) thinks every person of color will rob her, an embittered cop (Matt Dillon) stops motorists simply because they’re black, a well-to-do African-American couple (Terrence Howard, Thandi Newton) argues about how black they are, a detective (Cheadle) worries he has turned his back on his community.

Virtually every conversation in Crash is contentious, and the participants in these conversations run into each other far too often to be believable. But I’m willing to forgive Crash and its coincidences because it’s never judgmental or glib about the battles its characters face.

The film mourns the direction society is taking, but it is compassionate about the pressures that lead to foolish behavior. And, although Haggis’ sharp, surprisingly witty script admits there are no easy answers, it holds out hope that it’s possible to change hateful behavior.

Even the 12-people-in-a-huge-city-who-keep-running-into-each-other thing works for the movie. The idea is that even a big city is smaller than it seems. The planet is tiny, Crash argues, and the differences between us insignificant.