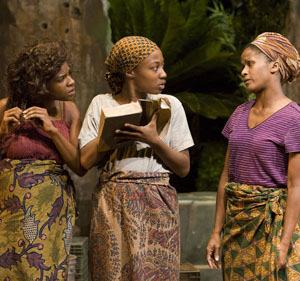 Set on a rotating stage blooming with lush green plants surrounding a concrete dwelling, we are introduced to five powerful women, and in a brief moment, learn to understand women’s survival in war-torn, male-dominated Liberia.

These were the women who conformed to the rape and abuses because they felt they had no choice: Wife Number One played graciously by Bahni Turpin and Wife Number Three played by Edwina Findley with energy and a sense of humor. Still, other far less tolerant women also emerge like the Girl, played with calm determination by Miriam F. Glover, rebel fighters like Number Two played fearlessly by Kelly M. Jenrette and the Peace Women, perfectly represented by Michael Hyatt, completely risking their lives to educate and give women under these conditions better lives.

Director and Obie winner Robert O’Hara chose the perfect combination of women to bring to life the beautiful words of Danai Gurira.