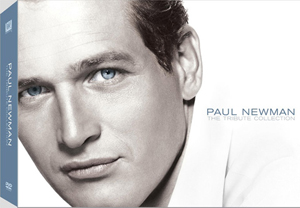 The Collector: Paul Newman: The Tribute Collection is a stunning 17-disc set offering a diverse selection from the legendary actor’s long career. It includes special editions of some of the majors: Butch Cassidy, The Hustler, The Verdict. There are three of his several collaborations with director Martin Ritt, including his debut in the Faulkner adaptation, The Long, Hot Summer. It also features two Robert Altman films: Buffalo Bill and The Indians and the flawed Quintet. Also included are the disaster epic The Towering Inferno, co-starring Steve McQueen, and Otto Preminger’s Exodus. While by no means definitive, this 13-film set has plenty to offer, including a photo book.

The Idiotbox: Ian McShane stars in “Kings,” the ambitious but short-lived series based on the Biblical story of King David. It is set in an alternate-reality modern day. Macaulay Culkin also stars. The Complete Series (the 12-episode run) is now available.

Also available: How I Met Your Mother: Season 4, The Unit: Season 4

Stranger Than Fiction: Marking the 40th anniversary of the horrific murders at Sharon Tate’s house by the Manson Family, History Channel examines the enduring legacy of this morbidly fascinating figure. Manson: 40 Years Later features interviews with Manson family members, Tate’s sister and the lead prosecutor in the case.

History Channel’s CGI-filled The Universe arrives on DVD and Blu-ray for its third season. The riveting education-as-spectacle series reveals how vast, timeless bodies throughout the universe came about and where they are going.

Foreign Fare: Four brilliant mathematicians, strangers to each other, are invited to the home of a mystery man. Once there, they are imprisoned in a room and given increasingly difficult puzzles to solve. For each wrong answer the walls close in on them. Fermat’s Room is a tense debut by successful Spanish television writers Luis Piedrahita and Rodrigo Sopeña.

Made in Japan: “Black Lagoon” (Complete Box Set is now available.) is an action-packed anime about modern day pirates who take a pleasure cruise hostage only to discover one of the passengers is the target of a mercenary group after classified data.

There aren’t a whole lot of things cooler than a secret ninja war. That’s the premise behind “Nabari” (The Complete Series, Part One is now available.), in which warring ninja clans invade the life of Miharu, an apathetic teen who happens to hold a coveted power within him.

Blu Notes: Gear up for Halloween with some hi-def horror. The Hannibal Lecter Anthology includes the first three Thomas Harris adaptations. Based on Red Dragon, Manhunter by director Michael Mann stars CSI’s William Petersen with Brian Cox as Hannibal the Cannibal. Tom Noonan plays Dollarhyde. Jonathan Demme’s The Silence of the Lambs gave us Anthony Hopkins’ classic take on Lecter. He reprised the role in the odd follow-up, Hannibal, with Julianne Moore taking over for Jodie Foster.

One of the best of the countless Stephen King adaptations, Misery stars Kathy Bates as a deranged fan who holds her favorite author (James Caan) prisoner and forces him to rewrite his last book to her liking. William Goldman provides the tense script.

Everyone’s favorite homicidal doll, Chucky, goes hi-def in Child’s Play. Brad Dourif voices the doll, who is possessed via voodoo with the soul of a serial killer. It holds up as a fun thriller.

Eliza Dushku stars in the slasher flick Wrong Turn about a group of teens trapped in the backwoods with a bunch of psychotic inbred mountainmen. The sequel is also available.

Also Available: In a Dream