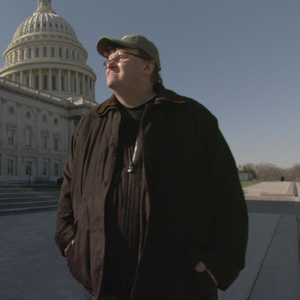 Michael Moore is never without an opinion. At the 2003 Academy Awards he used his acceptance speech for Best Feature Documentary to criticize the war in Iraq (“Shame on you Mr. Bush. Shame on you,” he shouted over a throng of boos.), while his last three films have more or less trumpeted his disdain for the Bush administration.

Now that Bush is out of office, one might think that Moore has nothing left to grumble about. But with his latest film, Capitalism: A Love Story, an indictment on the very economic system we Americans hold dear, Moore has taken on a new opponent.

“I’m doing it for Obama,” Moore says from the stage of Westwood’s Mann Bruin Theatre, where he held a post-screening Q&A with an audience of mostly college students. “As much as I admire and love the guy, I want to put him on notice that if he doesn’t do what’s in our best interest, the next film will make the stuff I did about Bush seem like a Disney movie.”

Moore wants Obama to be accountable for his past relations with Wall Street bankers, which is why he outs the President in the film for accepting campaign donations from Goldman Sachs, one of the largest investment banks in the country.

“I put the thing in there about Goldman Sachs because I want [Obama] to know that we know, and the I’m telling everybody else,” says Moore.

That Obama has accepted donations from the very institutions he has condemned over the last eight months may come as a surprise to the average viewer. But for Moore, it’s business as usual. As America’s chief watchdog of the underprivileged, Capitalism: A Love Story is nothing less than a vehicle to expose the “evils” capitalism creates.

Some of the stories he includes are an expose of “dead peasant” insurance polices that have large corporations benefiting financially from the death of employees, and an internal report from Citibank that boasts how the top one percent of the American population control more wealth than the bottom 95 percent. He even raises awareness to the plight of airline pilots, who routinely makes less than $20,000 a year – in some cases enough to qualify for food stamps.

As his track record shows, Moore is the lone documentarian that can make topical themes and ideas palatable to a mass audience (His Fahrenheit 9/11 grossed an unprecedented $220 million worldwide.). Still, his critics argue that Moore’s films are factually inaccurate and should not be taken for anything more than baseless Hollywood propaganda, an evaluation Moore likes to contend.

“Back with Fahrenheit 9/11, I had actually hired The New Yorker’s fact-checkers to fact check the film before we put it out,” Moore tells the crowd. “I started offering $10,000 to anyone who could find one single fact in the film that wasn’t true. I still have the $10,000 from Fahrenheit 9/11 and Sicko, and I’ll offer the same to you tonight.”

Moore has spent the past two decades exposing America’s lawmakers and privileged for their crimes and deceit. Capitalism: A Love Story is no less a continuation of these themes than it is an indictment of them.

With a body of work as steeped in cynicism and uncertainty as Moore’s, is he at all optimistic about America’s future?

“We are good at our core, but we are just sometimes slow learners,” Moore laments. “But the good news is, the American people, when presented with the truth, will just about always do the right thing.”

Capitalism: A Love Story is currently in theaters.