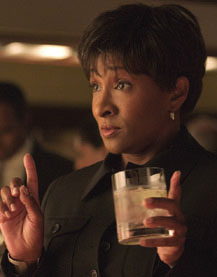 Ever since her appearances on HBO’s “The Chris Rock Show,” it’s been hard to deny the fact that Wanda Sykes is one of the funniest people in America. In recent years, she’s brought the funny to larger and larger audiences through her nationwide stand-up tours, TV series “Wanda at Large” and “Curb Your Enthusiasm” and a burgeoning feature film career. Sykes’s latest film, Monster-in-Law, just might be her biggest feature yet.

Sykes co-stars in Monster-in-Law with Jennifer Lopez, Michael Vartan and film legend Jane Fonda, who returns to acting after a 15-year hiatus. Despite the impressive cast, Sykes steals the show as Ruby, the tell-it-like-it-is assistant to the uptight TV interview queen played by Fonda.

According to Sykes, her memorable one-liners are a mix of scripted gems and improvisation encouraged by director Robert Luketic (Legally Blonde).

“There was a lot of good stuff already on the page, so I’d give them that and then Robert would say, ‘OK, now play around with it, try something different.’ Of course after working 14 hours that’s what the crew wanted to hear instead of saying, ‘That’s a wrap,’” Sykes jokes. Luketic has nothing but praise for Sykes’s unique talents.

“There are many surprises in Monster-in-Law, and I think [Wanda’s] one of the great ones,” he says. “She could talk about a sack of potatoes for an hour and a half and you would be enthralled and in hysterics. She’s this really rare talent.”

For Sykes, one of the biggest thrills of working on the film was having the opportunity to act opposite Fonda.

“After you do Pootie Tang and then you’re working with Jane Fonda ... I thought, ‘I actually rebounded, this is nice,’” Sykes jokes.

But working with an actress of Fonda’s caliber (Fonda has been nominated for seven Oscars and taken home two) can also be daunting.

“I was a little intimidated,” Sykes recalls. “She’s been gone for 15 years (Fonda’s last film was Stanley & Iris in 1990). I didn’t want the woman to come back and work with me and go, ‘Oh god, I’m not doing this again! You can keep Hollywood if it’s come to this!’ I wanted it to be a good experience for her.”

Luckily for Sykes, it was a good experience for everyone involved. So good in fact that even while they were on set, Sykes, Fonda and Luketic discussed possible sequels.

“There were a lot of ideas,” Luketic recalls. “One was to send Jane Fonda and Wanda to Europe somewhere and something bad happens.”

Sykes says she’d be game for a sequel or any re-teaming with Luketic, and Fonda has gone on record in recent interviews about her willingness to do a sequel as well.

Whether or not that happens will probably depend on how Monster-in-Law performs at the box office. But no matter what happens with the film, Sykes will continue to work in a variety of entertainment mediums. Her first book, Yeah, I Said It, was published in September and she continues to make guest appearances on Comedy Central’s “Crank Yankers” and HBO’s “Curb Your Enthusiasm.” She’s also continuing her stand-up act.

But unlike many comedic actors, Sykes says she doesn’t feel the urge to stretch her skills as a thespian into darker or more dramatic roles. “Comedy is my thing,” she explains. “I feel like that’s why I’m here. I’ve been given this gift to make people laugh. I have too much respect for real actors; I wouldn’t want to step in and take a part just because I was successful in one genre.”

Sykes says she has a simple goal as an actress, which applies to both film and television: “I just want to be a part of good work. Anything where I think, ‘This will be fun, I can learn something from this.’”

Monster-in-Law is currently in theaters.

Interviews
Lily James and Sebastian Stan find a real relationship at the heart of 'Pam & Tommy'
70 views
Interviews
Ricky Gervais knew people would be mad about his new Netflix special. He did it anyway
565 views

Interviews
The star of Oscar-nominated 'Flee' gives his first interview: 'I wanted my story to be seen'
1,113 views

Interviews
'Crazy Rich Asians' made Henry Golding a star. Now he's showing Hollywood everything he can do
787 views