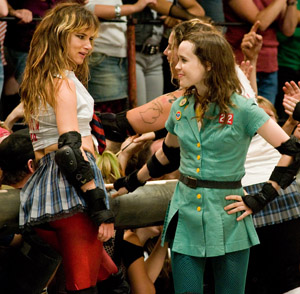 Whip It, Drew Barrymore’s directorial debut, stars Ellen Page as Bliss, a covertly rebellious Texas teen forced into pageants by her over weaning mother (Marcia Gay Harden) who splits her time between slinging swine at a mindless waitressing job and counting the seconds until she can break out of her Podunk hometown. That is, until she catches a glimpse of some local roller derby girls and becomes enraptured with the idea of joining their clan; all tattoos, miniskirts and Manic Panic dye jobs.

Bliss, knighted “Babe Ruthless,” joins the Hurl Scouts and finds a tribe of kindred spirits, roll-models (go with the pun, people) she can look up to like Smashley Simpson (Barrymore), Rosa Sparks (rapper Eve), Bloody Holly (Zoë Bell, best known as Uma Thurman’s stunt double in the Kill Bill films) and Maggie Mayhem (“SNL”’s Kristen Wiig). The film’s main focus is on the rivalry of the Hurl Scouts and their biggest competition, led by Iron Maven (Juliette Lewis giving one of the film’s best performances), and the tenuous balance Bliss must maintain between her suffocating small town life and dreams of a big, wilder world.

Barrymore set out to create what seems like a smaller, edgier Charlie’s Angels; a world where women are tough and sexy and throwing ’bows is just as funny as it is awesome.